On the day it was reported the number of known COVID-19 cases and number of Arkansans on ventilators reached new highs, Gov. Asa Hutchinson said efforts to move to phase two of reopening the state economy are “on pause.”

Gov. Hutchinson also announced Tuesday (June 2) during his daily COVID-19 briefing a June testing goal of 120,000, more than double the May goal of 60,000. The May goal was surpassed with 80,808 tests conducted. Part of the June goal includes testing all nursing home workers and residents, which is estimated to be about 50,000 people.

Of the Arkansas cases, 32.6% were from Benton (65) and Washington (57) counties, according to Arkansas Secretary of Health Dr. Nate Smith. Pulaski County had 63 new cases, but 46% were from a nursing home in Jacksonville. Sevier County in southwest Arkansas had 33 new cases. The rural county has had case growth following a mid-May outbreak at a Pilgrim’s Pride poultry plant in DeQueen. In Northeast Arkansas, Craighead County had 21 new cases and Crittenden County had 10. 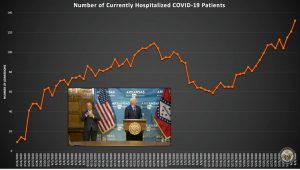 Gov. Hutchinson said hospitalizations is a key metric state officials watch, but the number is not “anywhere near the level that we would have a concern on the access and sufficient hospital capacity.” He also said the increase in COVID-19 cases is a result of more testing and in testing areas suggested by contact tracing efforts.

“Two months ago, everybody at this (media) table was saying, ‘Well, you’re not testing enough.’ Well, now that we’re testing we do know more and the good news from that is that we’re able to go in and trace it, isolate it, and to manage it,” the governor said.

Moving to phase two of reopening the state economy was initially set for May 18, but the rise in cases prior to that date forced Gov. Hutchinson to postpone that move. When asked Tuesday about the continued rise in cases and reopening the economy, the governor said phase two is still on hold.

“Moving to phase phase two, we look at it all the time. But I don’t think that would be appropriate to open up into phase two until we have more data and have more confidence,” he said.

Gov. Hutchinson also said he is asked by leaders in areas with low case loads to allow their region to move into phase two. He used Northwest Arkansas as an example of why he does not want to piecemeal the move to phase two.

“Well, that was actually the message I had from Northwest Arkansas two weeks ago. They all said, ‘We’re low cases. Can you let us go to phase two and open us up more?’ And you can imagine if we had made that decision what it would look like. … I think there is a lesson there that what might be a low case load today, we need to watch that like we watch the rest of the state.”

Previous post
May tax revenue down only 2%; Gov. Hutchinson ‘delighted’ with the report
Next post
Fort Smith reopens search for a city prosecutor