Editor’s note: Talk Business & Politics has launched a new weekend series of insights from well-known business and political leaders seeking their advice to share with peers and newcomers. Our aim with this feature is to provide you some context on this leader’s contributions to Arkansas and how advice helped shape their roles in important and influential positions. Hopefully, it will spark a good habit or offer perspective to you as you meet the challenges of policy or professional work.

Blanche Lincoln served Arkansas as U.S. Senator from 1999-2011 and was also in the U.S. House of Representatives from 1993-1997. She was the youngest woman ever elected to the U.S. Senate at the age of 38 and followed in the footsteps of Hattie Caraway, a former Arkansas Senator who was the first female ever elected to the upper chamber.

Since Lincoln’s re-election defeat in November 2010 to Sen. John Boozman, she has started a highly successful lobbying and governmental affairs firm, Lincoln Policy Group. She also sits on the board of directors for two publicly-traded entities, energy giant Entergy Corp. and Rayonier, a global timber and forest products company.

On this Mother’s Day, we asked Lincoln, the mother of two twin boys (now age 22), for political and life advice that has served her well.

For starters, she says “being authentic and being honest and being willing to do the work” is something she and her husband, Dr. Steve Lincoln, have tried to instill in their kids.

“My husband and I’ve tried so hard to teach our children. There’s something called the grind, and he told them, ‘I didn’t particularly enjoy four years of residency, because it was a grind, but I’m the better doctor for it.’ I told the boys, ‘if you think campaigning is easy, it’s not. It’s fun. It can be fun. But at some point when you’re spending 18 hours a day, seven days a week out on the road, it’s a grind’ and it can be.”

Lincoln said former Arkansas Senator, Governor and Congressman David Pryor also gave her sound advice that has stayed with her to this day. 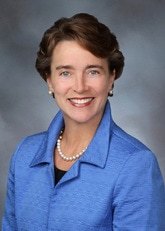 She also recalls advice from world-class sprinter and Olympic gold medalist Florence Griffith Joyner — “Flo Jo” — who had twins of her own and a connection to Arkansas State University through her husband, Olympian Al Joyner.

“She was so wonderful and so thoughtful and helpful to me and very comforting. She had twin boys. And when my twins were born, she said, ‘All I can tell you is never, ever, ever make them share a birthday cake. Always have two birthday cakes.’ There’s tons of good advice in that,” Lincoln said.

Lastly, Lincoln said her grandmother offered her advice that she shares often with her co-workers.

“My grandmother used to always say, and I say it to this day, and my staff knows, all of them know it: ‘All anybody can say to you is no, but they can’t say no if you don’t ask.'”