An oil and gas exec with a decade or two of experience is likely more cautious than excited about the recent rise in energy prices – especially those who manage smaller, privately-held operations. They’ve seen Lucy hold this football before. Today’s high is tomorrow’s sigh.

It’s now all hands on deck, with natural gas prices well above $6 per MMBtu (metric million British thermal units, a standard unit of measurement in the energy sector). Still, Hanna is anything but exuberant about the change in fortune.

“Look, my attitude today is to be cautious and clean up your balance sheet. Even with these prices, the atmosphere is a little tenuous,” Hanna said in a recent interview. “I plan to pay my taxes, get rid of debt, put money in the bank and see how long it lasts. … But no, we’re not aggressively pursuing that (drilling more wells).”

SEVERANCE TAX GAINS
These prices, however, are a welcome relief to an industry that, for the past several years, has struggled with relatively low prices and U.S. and global energy policies geared to incentivize a transition away from the use of fossil fuels.

After setting a record high of $21.46 per MMBtu in September 2005, the chart for natural gas prices is a pattern of steep highs and lows that could pass as an abstract painting of the Alps. In April 2017, the average natural gas price was $3.76 per MMBtu and would fall to $1.83 in April 2020. But in the past two years, the price has begun to recover, with the Henry Hub price trading just under $7 per MMBtu as of Thursday (April 21).

The price gain is also benefiting Arkansas’ highway needs. The state’s severance tax revenue through the first nine fiscal months (July 2021-March 2022) totals $44.076 million, already well ahead of the $18.978 million in the previous fiscal year, according to the Arkansas Department of Finance and Administration (DFA). Collections set a record of $78.634 million in fiscal year 2015. Of the revenue, 5% goes to a state fund to repair any infrastructure damaged in natural gas extraction, and 95% is directed to the Arkansas Department of Transportation for specific highway work.

“The increase in collection this year can be attributed directly to the rising price of natural gas. With more than $44 million in fiscal year 2022, we have already doubled the amount collected in fiscal years 2020 and 2021 combined. This will be the largest year for collection since fiscal year 2015 when $78.6 million was generated by the severance tax,” DFA spokesman Scott Hardin noted in a statement to Talk Business & Politics. “The majority of attention has recently been paid to taxes paid at the gas pump. However, the natural gas severance tax has quietly generated $44 million for the state this year with three months of collection remaining.”

STORAGE DECLINES, RIG NUMBERS
Also cautious is Bennie Westphal, the CEO of The Westphal Group, which is involved in commercial real estate development, oil and gas investments, and insurance sales. (Westphal is an owner of Natural State Media, the parent company of Talk Business & Politics.) He said federal policies – bans on fracking in certain areas, denials of leases, and land use bans – from the Biden Administration have reduced the supply of natural gas and caused energy companies to reduce or avoid spending on exploration and production. 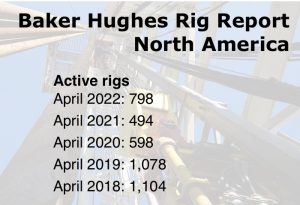 U.S. natural gas storage is down. The U.S. Energy Information Administration reports 1,450 BCF (billion cubic feet) in domestic storage as of April 15, down 22.8% compared with the same period in 2021 and 16.7% below the five-year average. Westphal said a decline in storage, significant energy supply-demand changes related to COVID-19 consumer shifts in spending, and the Russian invasion of Ukraine have changed the price picture in recent months.

“Europe is trying to ween itself off of Russian oil and gas, and the U.S. is doing all it can to help,” he said. “Several area oil and gas companies are starting to drill a few wells in eastern Oklahoma and western Arkansas. The price increase benefits the many thousands of mineral owners in (the Arkoma Basin).”

According to Westphal, there were 904 horizontal permits awarded during March in the shale patch that includes parts of Texas and New Mexico, which was an all-time high. The challenge now, he said, is to find “equipment, parts and trained people” to meet the emerging demand for energy. Hanna also noted that finding enough qualified labor could be a problem if demand grows.

“The folks running the rigs a decade ago are now largely retired,” he said.

The closely-watched Baker Hughes Rig Report shows 796 active rigs in North America as of April 14, considerably more than 495 at the same time in 2021 but below 1,109 in April 2018. Texas has the most active rigs at 340, followed by New Mexico with 96, Louisiana with 57, Oklahoma with 50 and North Dakota with 33. Arkansas had no active rigs in the April 14 Baker Hughes report.

GEOPOLITICS, TRANSITION ENERGY
Mike Callan, senior vice president of Houston-based Stephens Production, is another exec who is not entirely celebrating the rise in prices. He said an increase in LNG (liquified natural gas) exports and unique global factors are part of the price gains. Such factors, he said, could change overnight. Or not. That’s the dilemma.

“There is so much geopolitics driving this right now,” said Callan, who is based in Fort Smith. “As markets try to adjust to what is going on in Europe, you could have these prices elevated for the next year. I think everyone is producing everything they can right now, and that’s just because of the high prices we’re seeing. … But for how long? That’s really hard to say.”

Like Callan, Hanna is also unwilling to guess where natural gas prices will be next year. He is sure that his company “will not make any big decisions” this year based on energy prices.

“The variables that affect it (energy prices) are just so acute that you just can’t guess,” Hanna said.

Hanna is also agrees with the transition away from fossil fuels but believes natural gas should be a more significant part of that effort. He said recent energy price hikes faced by consumers should be a wake-up call that such a transition may not be cheap or easy.

“Natural gas, the reality of it is to me, is that it’s a good safe fuel. It’s as low as an emission fuel that’s out there. So to me, the reality of the need to do that (transition to cleaner energy) is shining a light on natural gas.”