Gov. Asa Hutchinson received his Pfizer booster shot Tuesday (Sept. 28) moments before he held his weekly COVID-19 pandemic press conference. The governor, his wife and Arkansas Secretary of Health Dr. Jose Romero got their boosters shot on live television to encourage others to get vaccinated, the governor said.

Hutchinson said he knows many in the state, where now 7,651 people have died from the virus, are tired of dealing with problems associated with COVID-19, but this isn’t the time to let up on public messaging.

The governor noted that people who qualify for a booster include those over the age of 65, those with qualifying medical conditions, and those who are in professions that are prone to high exposure.

During his subsequent press conference, Hutchinson announced that schools with 70% or more of their students and faculty vaccinated, won’t have to adhere to the strict quarantine rules. He said the state is about to start a pilot program to allow some school districts to rapid test exposed students who are not vaccinated.

At least one school in Northwest Arkansas has asked for the rapid testing procedure, but Hutchinson declined to say which school.

Romero said quarantines have been used for hundreds of years to effectively stop the spread of diseases including the Black Plague during the Middle Ages. One infected person infects on average five more people, so in a school setting a large number of students could be exposed in a short period of time. 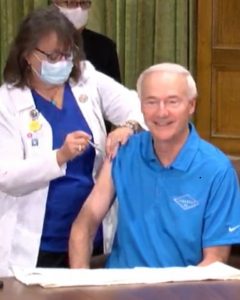 A vaccine for students ages 5-11 is on the verge of approval and could be available by late fall or early winter. Preliminary research has shown that this vaccine is highly effective and safe, Romero added.

Romero said public officials are tracking new variants that have developed in the state, but at this time none of them is as transmissible as the Delta Variant which has been spreading across the state for months. He added that public officials are weary that flu season could be much worse this year than the previous couple of years and that could add to the burdens on the state’s healthcare system.

“Those are preventable if we get vaccinated,” he said.

The numbers remain grim in the Natural State, but there are a few positive signs. The number of cases statewide in schools is down this week by about 500 cases to 2,100, Arkansas Secretary of Education Johnny Key said. No school districts are having to modify in class instruction this week to accommodate a major outbreak.

The death toll continues to rise, but the number of people on ventilators has dropped by nine this week to 225. Hospitalizations have dropped by 26 to 809 patients. The state currently has 10,858 active cases.

About 52% of the qualified population is now vaccinated while another 11.5% have received at least one dose.

The last emergency order given by Hutchinson expired earlier this week, and he said he doesn’t think it necessary to seek another one at this time. He also said that any legislation, such as a proposed bill to give unemployment benefits to anyone who loses their job from not being vaccinated, can’t be considered during the current legislative session, and will have to be vetted during a special session.