Fort Smith’s Charolette Tidwell’s smile will be lighting up supermarket shelves through a Lay’s potato chip campaign. Her community efforts also resulted in her receiving from Fort Smith Mayor George McGill a ceremonially key to the city.

“The Lay’s Smiles packaging and brand’s digital media channels will spotlight the unique stories of these 30 “Everyday Smilers” whose impact includes helping the homeless, veterans, youth, elderly and more – in hopes that their inspiring work will bring smiles to the faces of people across the country,” a news release from Lays said.

This is the third year for the Lay’s campaign, which again will benefit Operation Smile, an international medical charity that provides access to safe surgical care to those who have cleft conditions. Every purchase of a Lay’s specially marked bag supports the brand’s donation of up to $1 million to Operation Smile.

Tidwell is one of the 30 whose smiles will beam up from chips packages. Tidwell, 74, is the founder of Antioch Youth & Family, where she has been spreading smiles for 21 years. Her efforts during the COVID-19 pandemic have brought $700,000 worth of food to Martin Luther King Park since March. She has also delivered food to 100 families considered very low-income and without transportation and has created a drive-thru pantry to offer virtually contactless food assistance through her Antioch by Appointment program. She assists 25,000 most months through the program. 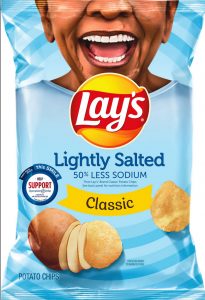 Tidwell recently partnered with the Fort Smith Police Department to bring food to needy families during domestic disturbance calls and is with the Robert Wood Johnson Foundation to establish a community coalition to create a trauma-informed community.

“We want to thank Lays for putting one of the most beautiful smiles you’re going to see anywhere on their product,” said Mayor George McGill of Tidwell at the start of Tuesday (Sept. 15) night’s Fort Smith Board of Directors’ meeting.

McGill also presented Tidwell with a key to the city for all the work she has done to help those in need within Fort Smith, noting that Tidwell has been recognized as one of their Women of Worth by L’oreal of Paris and has been featured in eFort Smith, Huffington Post, People Magazine, Reader’s Digest, Women’s Day and NBC Nightly News. Tidwell said she was carrying on the work started by her late husband, Lawrence Tidwell. Lawrence Tidwell, a sergeant in the Fort Smith police department, and two other officers led outreach and mentoring from the elderly to youth in Fort Smith. Lawrence Tidwell died in 1997. Tidwell started Antioch in 2000.

This year’s smile campaign worked a little differently than years past. The more than 70 different bag designs were created using CGI technology after COVID-19 concerns required cancelling the in-person production that would have brought all the “Everyday Smilers” to Dallas for a VIP photo and video shoot experience.

Each “Everyday Smiler” was instead sent instructions to capture self-portraits using their phones – and the resulting amateur photos were professionally enhanced for transferring on to the Lay’s bags, the press release said.

“Having pored through thousands of nominations and already being personally committed to these Smiles ourselves, particularly now when people are looking for more reasons to smile than ever before, we knew we couldn’t let a cancelled photoshoot keep Lay’s from sharing these inspiring stories with the world,” said Sadira Furlow, vice president of marketing, Frito-Lay North America.

Last year, more than 71,000 people scanned the Lay’s Smiles QR codes to hear the unique stories behind each “Everyday Smiler.” Tidwell’s video has her telling how her career in nursing led her to a desire to make sure no one goes hungry. Her image will be featured on bags of Lightly Salted and Jalapeno potato chips.