The University of Arkansas baseball team finished the 2019 season where only eight programs end up each year — the College World Series.

The Hogs did something else last year that’s also rather exclusive in NCAA Division I baseball— turn a profit. The baseball program finished in the black in 2018-19, to the tune of $855,055. The program had a total operational revenue of a record $6.73 million to go along with expenses of $5.87 million.

The figures are in the university’s annual Equity in Athletics Disclosure Act (EADA) survey. Arkansas, and every other school in the country, self-reports financial information to the federal government annually in order to comply with the EADA. The most recent numbers cover the 2018-2019 fiscal year, from July 1, 2018, to June 30, 2019.

There are 299 Division I baseball programs. Though specific figures were not available, an NCAA spokesman estimated less than 10% of them turn a profit. In other words, unlike football and men’s basketball, most athletic departments don’t count on baseball as a “revenue” sport — even the most successful programs.

When the University of Florida won the 2017 College World Series, the baseball program had revenue of $1.46 million and expenses of $5.03 million — a deficit of $3.57 million.

Further underscoring the point, Texas Tech University has reached the College World Series each of the past two years and four of the past six years. In the past two fiscal years, the Red Raiders baseball program lost a combined $5.6 million.

For all the Razorbacks’ recent success on the diamond, the baseball program also averaged an annual deficit of roughly $280,000 in each of the previous five seasons, according to the EADA data. The only season the baseball program turned a profit for the Arkansas athletic department was in the 2013-2014 fiscal year, finishing $13,149 on the positive side of the ledger. Baseball program revenues totaled $3.18 million that year, less than half of what they are today.

Rising attendance, premium seating and ticket sales are at least partially responsible for the rise in revenue. Total attendance at Baum-Walker Stadium last year rose to a record 348,775, an average of 8,719 per game. Only LSU (425,377) and Mississippi State (373,784) had higher attendance figures.

Arkansas baseball’s largest revenues last year were generated by ticket sales ($2.91 million), accounting for more than 43% of the program’s revenue. Ticket sales jumped nearly 23% from 2018 and are up 50% from $1.94 million in 2014. Royalties, licensing, advertising and sponsorships ($1.63 million) and contributions from fans and boosters ($1.27 million) were also top revenue sources for the baseball program last year.

Those figures are in Arkansas’ annual financial report that was sent to the NCAA in January. NCAA member institutions are required to submit financial data detailing operating revenues and expenses related to its athletics program to the NCAA on an annual basis.

In a statement provided to the Northwest Arkansas Business Journal, UA Athletic Director Hunter Yurachek said the Razorbacks are “fortunate” to have strong support from season ticketholders, donors and sponsors for football, basketball and baseball programs.

“While many programs rely on revenue produced from one program or in some limited cases two, we have three programs that help generate funding to help sustain our entire program,” Yurachek said. “That support, along with distributions from the Southeastern Conference, generate revenues to help maintain our status as a self-supporting athletic program, while also supporting other campus initiatives.”

“There are merchandise sales and sponsorships that in prior years were not broken out by sport,” he said. “Factoring those dollars into the baseball revenues, would have resulted in [profit] in most years.”

The UA is in the midst of an approximately $27 million investment to build a new 45,000-square-foot baseball performance center in the right-field corner of Baum-Walker Stadium. It’s expected to be completed next year. In addition to a number of amenities for players, it’s also expected to create new premium viewing areas to market to fans.

The Razorbacks, a consensus top five program according to preseason rankings, opened the 2020 baseball season Feb. 14 at home against Eastern Illinois. To capitalize on the venue’s popularity and profitability, Arkansas plays 13 of its first 16 games this season at Baum-Walker Stadium, and has 32 homes games scheduled in the regular season. 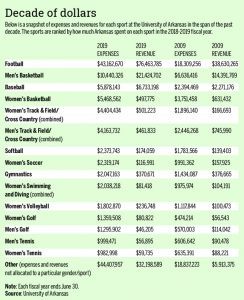 As for the rest of the UA athletic department, it was another successful year financially, with a profit of $6.3 million in the 2018-2019 fiscal year. That’s up sharply from the previous year’s profit of $1.95 million.

The UA had 484 student-athletes competing in 20 sports last year — eight men’s sports and 12 women’s sports. Arkansas’ athletic department is financially self-sufficient, meaning it does not use institutional money or student fees.

Despite the lack of on-field success — the Razorbacks have a record of 37-62 since the start of the 2012 season — annual revenue for the sport has averaged $67.94 million for the past six years, and annual profits have averaged $31.6 million in the same time frame.

RISING REVENUE
The EADA numbers also show how both revenue and spending on college sports has gotten bigger over the past decade, both at Arkansas and across the country, as schools have benefited from lucrative television contracts. 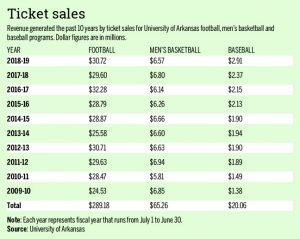 Over the past 10 years, Arkansas’ revenue from athletics has grown 118%, from $63.97 million to $139.5 million. Just like at other schools across the country, head coaches have been a big beneficiary. The average annual salary that Arkansas reported paying the head coaches of its men’s programs has more than doubled over the past decade, growing from an average of $691,596 to $1.34 million.

The average salary the school reported paying to the head coaches of its women’s programs has increased from $172,666 to $260,607.

The EADA data did not provide the salary information for each individual sport.