Arkansas State Parks and the Walton Family Foundation are collaborating on a $40 million project to complete an 84.5-mile trail in the Delta region of Southeast Arkansas.

“This is great news for cyclists and hikers, who have waited more than 20 years for the completion of this rails-to-trails project,” Hutchinson said. “The matching grant we announced today, combined with Arkansas Parks and Tourism funds, means that the wait is almost over. The $7 million in tourism that the 85-mile trail will attract, along with the 600 jobs it will create, will infuse renewed energy into southeast Arkansas along the trail. Hikers and bikers will see bottomland hardwood forests and views from the levee that we don’t see from our cars. This is a great project for Arkansas.”

Hutchinson also cited a 2019 economic impact study showing that the trail would provide an additional $9 million in health benefits along with the $7.7 million in economic benefits. The state will apply for federal grants to offset its half of the Walton Family Foundation’s 50/50 matching grant.

“The Delta Heritage Trail will connect the region’s expansive natural beauty and create new ways to experience its unique cultural offerings,” said Jim Walton of the Walton Family Foundation. “This joint effort is a dream nearly 30 years in the making, a bold idea now being realized in a community that, with continued support, can reach its enormous, untapped potential.”

Karen Minkel, home region program director for the Walton Family Foundation, explained that the organization has been dedicated to improving the quality of life in the Delta for more than 30 years. It has been focused on improving youth engagement and economic development in Delta, and the trail will connect 80 miles of communities in the region. Along with spurring economic activity, the trail will attract people from across the nation to see the natural beauty, culture and heritage of the Delta, she said. 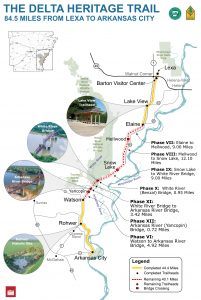 Stacy Hurst, secretary of Arkansas Department of Parks, Heritage and Tourism, said the Delta Heritage Trail master plan was approved in 1997 and the trail has yet to be completed.

“Because of this generous matching gift, we’ll be able to complete the Delta Heritage Trail in five years providing an enhanced recreational opportunity for residents, bringing more visitors to the area and increased economic growth to local communities,” Hurst said. “The completed trail will provide users a unique glimpse into the rich history and natural beauty of the Arkansas Delta.”

“Delta Heritage Trail State Park provides a one-of-a-kind experience for visitors,” Spann said. “When completed, not only will it cross two major rivers — the White and Arkansas — it also traverses through the Dale Bumpers National Wildlife Refuge that has enormous old-growth cypress trees that will give the visitor a sense of being in a ‘Jurassic Park’ environment. In this area of the refuge, sections of Delta Heritage Trail State Park are elevated, providing an exceptional view of the scenery.

Guests will be able to have extraordinary birding and wildlife watching opportunities and may even catch a glimpse of one of the many black bears, which is considered the best genetic representative of the historic bear population that existed in the Lower Mississippi Valley of Arkansas.”

The Walton Family Foundation grant also includes money to support a plan to publicly recognize the life and professional accomplishments of John Harold Johnson (1918-2005). He was born in Arkansas City and rose from poverty and racial discrimination to build a publishing company that helped to change the perception of African Americans in the United States. Johnson Publishing Co. became the largest African American-owned publishing company in the world and launched magazines Ebony and Jet.

Rails To Trails
The Delta Heritage Trail State Park is being developed under the national rails-to-trails initiative, in which former railroad lines are being converted to pedestrian and bicycle trails. In 1992, Union Pacific Corp. donated its 73-mile right-of-way for the project, and the donation was possible under rail-banking provisions of the National Trails System Act. The corridor passes through remote and scenic areas in the Delta region of eastern Arkansas and was the historic route of the Delta Eagle, the Missouri Pacific’s passenger train that traveled along The Route of the Eagles. When completed, the trail will be 84.5-miles long, between Lexa and Arkansas City.

The Delta Heritage Trail State Park visitor center is at the Barton Trailhead. There are restrooms, five primitive campsites with tent pads, picnic tables, grills and drinking water access. The visitor center at 5539 U.S. 49, Helena-West Helena, also has a gift shop and offers bicycle rentals. The Pedal & Paddle Tour includes a 12-mile bicycle ride from Barton to Lakeview and kayaking on Old Town Lake before a 12-mile return trip to Barton.

The Arkansas City trailhead includes a building designed in the style of historic rail depots housing administrative functions, a bathhouse and an open pavilion. Picnic areas, a bicycle repair station and two oversized tent pads are also available at the trailhead.