Garrison Avenue will welcome a new restaurant with the grand opening of Gus’s Bar and Grill Monday (Nov. 12) at 823 Garrison Ave., the former site of Saké Martini & Sushi Bar.

The restaurant, which will be open for business at 11 a.m. Monday (Nov. 12), features a full bar, family-friendly atmosphere and wide range of food, said Mike Stephenson of Greenwood, who owns the bar and grill along with his wife, Karen. The couple also own and operate the Rogers Avenue Pizza Parlour. The Stephensons have worked at the Pizza Parlour for about 27 years each and acquired ownership from the late John Decker, who died in 2014.

The restaurant was open Friday night for a “soft opening,” Stephenson said, in which friends, family and vendors were “guinea pigs” to test the system.

“That gives me two days to tweak anything that needs tweaking before we open Monday,” Stephenson said.

The restaurant will employ about 35 when fully staffed, Stephenson said. The menu will range from chicken wings to pesto pizzas and include sandwiches, burgers, nachos, hot dogs and salads all ranging from $5 to $14.99 for the largest pizza on the menu.

“We have a salad bar and baked potatoes and cobb salads and chicken salads,” Stephenson said. “About the only think you aren’t going to find here is a linen napkin to lay in your lap.” 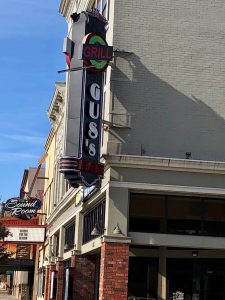 For entertainment the bar and grill will feature karaoke, live bands, stand-up comedy, a pool table, a shuffleboard table and an iTunes jukebox for “when we don’t have a band,” he added.

The Stephensons received a $15,000 building permit in late August for repair work.

“We have totally redone the place with a garage theme. We have old car signs and old oil cans. There’s a motorcycle wall. I really think we have something that is offered nowhere else on Garrison Avenue,” Stephenson said. “I think it’s really inviting and really relaxed with all the windows and the three bay doors that can open up. I think it’s a perfect location.”

Adding to the atmosphere is a staff hired to cater to the customers.

“My vision was to make it really relaxed and comfortable. We have hired from the entire spectrum. And I think we have the best personalities on Garrison. The staff are all friendly, knowledgeable and very well trained, and they just have great personalities,” he said.

The restaurant, which does not allow smoking, will be open seven days a week, 11 a.m. to 10 p.m. Sunday through Thursday and 11 a.m. to midnight Friday and Saturday.

In addition to his time with Pizza Parlour — Stephenson and wife, Karen, have collectively more than a half-century at the establishment that opened in 1971 — he was the general manager at Western Sizzlin’ for about six years.

Saké Martini & Sushi Bar operated at the address from 2012-2018. Owner Dave Rolens decided to close the doors at the end of June to pursue other endeavors. Prior to Saké, the address was the site of Mojo’s Ivory House and Piano Bar.