“We’ve spent a lot of time over the last two years discussing changes to this structure that will carry us into the future and allow us to grow, add even more new services and foster the sharing of resources across the corporation,” CEO Greg Williams said in a news release. “I’m confident that the changes we’ve made will help us become a stronger company and serve clients more efficiently.”

Dan Greenland, the company’s chief operating officer for the past 19 years, will assume the role of strategic growth officer, according to a news release. He will focus on employee development and training, according to the release, facilitating meetings, and researching new markets and services. He will remain on the company’s board of directors.

Greenland will be replaced by dual COOs Brad Hegeman and Greg Fogle. Hegeman had been president since 2009 of the company’s South Central operations, a territory that encompasses central and northeast Arkansas and the Memphis metro area. The territory is now known as the “South Region.”

Fogle had been president since 2011 of the company’s Midwest operations, a territory encompassing Northwest Arkansas, Kansas City and southwestern Missouri. The territory is now known as the “Central Region,” and no longer encompasses Nabholz’ Kansas operation, which is now its own region. 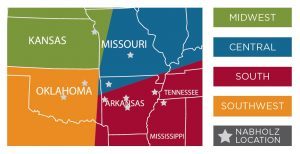 Former executive vice president Jon Pahl is now president of the former Kansas region, which the company has renamed the “Midwest Region.”

Nabholz’ Civil group, once under Nabholz’ regional Central operation in Northwest Arkansas, will be broken out as its own operation. Current Civil manager and 40-year employee Jim Spotts has been named president of this group.