The heirs of Wal-Mart Stores founders Helen and Sam Walton continue the philanthropy that was instilled in them years ago, according to Carrie Walton Penner, grand-daughter of the Waltons and the foundation’s board chairwoman.

The Arkansas Delta home region giving focuses on improving education and economic activity. That area received $6.5 million last year, compared to $3.5 million in the prior year. In the Delta, the foundation is engaging young people and promoting long-term economic growth. After-school programming continues to expand, including a new Boys & Girls Club facility in Phillips County. To spur lasting economic opportunity, the foundation and other partners also invested in the restoration of a short-line railroad in Helena, Ark,. The project created or maintained more than 60 jobs, with 30 more expected in 2017, the report states.

Education, another key area of focus for the foundation, comprised the largest percentage of the funds given at $190.9 million, or 42% of the total given in 2016. “Education funding” distributed across Arkansas totaled $600,000, down from $2 million in the prior year. Another $83.2 million was spent to support projects and entities aimed at protecting the environment across the country. The largest benefactor was the Environmental Defense Fund that has offices in Bentonville and works with Wal-Mart Stores on its sustainability platform. EDF received $13,163,592 last year from the foundation. 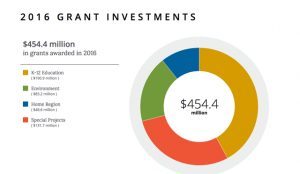 The Walton Family Foundation also handed out more than $132.69 million in grants dubbed “special projects.” These funds were one-time gifts based on grant applications made by the benefactors. There were roughly 174 special project grants awarded to organizations around the Natural State last year. The total of funds received is more than $36 million. University of the Ozarks in Clarksville was the biggest beneficiary of special project funds last year valued at $10.166 million. Other large benefactors around the state include:

The Walton Family Foundation is approaching its 30th birthday and there are three generations of Waltons involved in the management and giving of the fund. Board Chair Carrie Walton Penner, wife of Wal-Mart Stores Board Chairman Greg Penner, said the family’s engagement is stronger and more strategic than ever.

“We have restructured how the foundation is governed to act more urgently and effectively. Up to February 2016, we had open engagement by all family members. We had a board made up of 18 individuals, all family members. Now we have five family members on the board – my aunt Alice; my brother Ben; my father Rob; my cousin Steuart; and myself. Other family members serve the foundation through membership on committees. The change has helped us focus our work. At the same time, it has allowed a full range of family members to be engaged in their specific areas of interest. We needed to figure out a way to be more efficient and effective while maintaining that strong family involvement,” Penner said.

When asked why family engagement is important to the foundation, Penner said it’s what her grandparents wanted.

“They wanted the foundation to bring us together, to work together, to be active in giving back to our local community, our national community and internationally. Looking to the future, they also wanted to make sure the foundation was open enough to adapt as time goes on and as family members brought new interests to our philanthropic work,” she said.

Penner also said the direction and focus of the foundation’s giving is based on working on the biggest challenges that impact quality of life and environment, with K-12 education being a big part of the agenda.

“We looked at it in the context of identifying the big social problems that needed to be addressed: How do you improve education for the kids most in need, the children who are being underserved? That’s also the approach we take with the environmental issues we work on, such as freshwater and fisheries. What are the big issues that need to be addressed? Because we are a family philanthropy, we can approach these issues in a very creative way that can complement work being done by those that have already been thinking about it, like a government or a school district. We want to be innovative. Sometimes we can think a little bit more out of the box than a larger institution,” she said.

“The idea of the moment in philanthropy is around ‘reaching scale.’ Foundations used to think more in terms of just finding great organizations to invest in. The new idea is to look at big issues at the systems level and at scale. It is a fantastic development, but it is also very hard to do. This family is doing that. This foundation feels very comfortable taking on those big issues,” he said.

Peterson said the foundation has set ambitious five-year strategies and will focus on the various programs all working together and sharing and learning. Over the past four years, the Walton Family Foundation staff has nearly doubled in size to nearly 100. The foundation’s main offices are in Bentonville, but it also has staffed offices in Denver, Jersey City, N.J., and Washington D.C.

“If we are truly focused on change at a systems level – whether it’s the Colorado River, the Mississippi River or an entire city – then collaboration is critical. It requires working with other funders and other partners,” he added.

Penner said philanthropy is vital to creating change in the world because the foundation can take risks that public and private sectors can’t.

“Our foundation is more effective in tackling large-scale challenges than ever. We have a great team of professionals in place. We have dedicated grantees. We have a really strong feedback loop within the family to make sure we get the best ideas on how to give back and to ensure ongoing and lasting engagement. In fact, the fourth generation is starting to get involved. The whole family is proud of that, and I think that is exactly what my grandparents envisioned,” she said.