Imports and exports are vital components of every day life for retail giant Wal-Mart Stores, which is why the retailer monitors trade legislation and political ideologies which could disrupt the product supply chain.

Lisa Schimmelpfenning, vice president of direct imports administration at Wal-Mart Stores, recently spoke about the retailer’s efforts to build up import program over the past two decades. Schimmelpfenning was one of the speakers at the recent Arkansas Trucking Association annual business conference in Rogers.

Wal-Mart imports far more than it exports, and she said the retailer wholeheartedly supports free trade. The retailer noted in its recent 10-K filing that changes in trade policies, including tariffs and government regulations between the U.S,. and other countries where it sources many of the products it sells, could create considerable risks to the company. She said the proposed border adjustment tax doesn’t look imminent, but if approved would increase the cost for importing goods for all companies. She said there is a consolidated effort by many business sectors to defeat a border tax because it would hurt many companies with operations outside the U.S.

“What would the border adjustment tax do to the price of a sweater? Many think it would raise the cost of goods imported by 20%,” she said.

Wal-Mart noted in its filing with the U.S. Securities and Exchange Commission: “A significant portion of the general merchandise we sell in our U.S. stores and clubs is manufactured in other countries. Any such actions could increase the cost to us of such merchandise (whether imported directly or indirectly) and cause increases in the prices at which we sell such merchandise to our customers, which could materially adversely affect the financial performance of our U.S. operations and our business.”

Wal-Mart declined to disclose the value of its imports and exports each year. However the Journal of Commerce reports Wal-Mart has been the single largest U.S. importer of consumer goods since 2012. Often the volume of the retailer’s imports surpasses the trade volume of entire countries. In 2015, Wal-Mart imported 795,900 TEUs – or shipping containers – full of product from abroad. The retailer’s import volume grew 10.5% since 2012, according to the Journal of Commerce report. 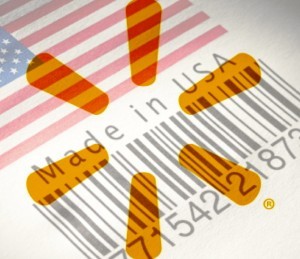 Schimmelpfenning admitted the retailer is criticized for its massive imports but she noted that the retailer also exports products. She said the retailer’s growing e-commerce business is helping to raise exports for things like health and beauty aids and vitamins to China, where there is a natural distrust of the Chinese market. In 2014, Wal-Mart also said it exported $45 million of pears, apples and cherries all from Washington state. The products were sold at its retail stores in Canada, Great Britain, Mexico, China and India. Wal-Mart opened a sourcing office in Yakima in 2009 to help it source fruit for its U.S operations and abroad.

“By using the strength of our supply chain, we’re able to source from 60 countries to send the right products at the right price to customers, not just in the U.S., but to every market where we operate stores,” Wal-Mart noted in a April 2014 blog post on is website.

Ragan Dickens, corporate spokeswoman at Wal-Mart, said according to data from suppliers, “items that are made here, sourced here or grown here account for about two-thirds of what we spend to buy products at Walmart U.S.”

Critics said the stat is skewed given that Wal-Mart is the nation’s largest grocer and much of the U.S. product sourced is food. Since 2012, Wal-Mart has also pledged to buy an additional $250 billion of product made in the U.S. in an effort to support U.S. manufacturing jobs. Some of that product includes bicycles, televisions, pacifiers and bath towels. But there is still much imported from abroad.

TRADE COMPLICATIONS
Schimmelpfenning said trade has become more complicated in the post 9-11 world. She said Wal-Mart began in the 1980s developing a broader relationship with Customs and Border Protection, a division of Homeland Security.

“We have invested board and executive time to be present at meetings to help educate customs officials about the supply chain processes. Post 9-11 customs officials who used to look for drugs are now trying to spot threats of terrorism,” she said. “Most agencies are doing more with less and if we can help government figure out how to best assess the risks it will help us in this important business as well. Part of that is relevant to the supply (chain) and how it does and doesn’t happen.”

Schimmelpfenning said the first months of the Trump administration have included much rhetoric on trade. For instance, the back and forth on NAFTA – the North American Free Trade Agreement – and the U.S. threat to pull out.

“One day we are pulling out and two days later we are back in for now,” she said.

She said much of television manufacturing has moved into northern Mexico and that’s an industry that would be hurt if the U.S. were to pull completely out of NAFTA. She also said the unraveling of the Trans-Pacific Partnership (TPP) was a blow for Wal-Mart given that the retailer had spent an entire year in Vietnam working to create public/private partnerships to facilitate trade and educate suppliers who could help the retailers do business with Vietnam.

She said China is the “elephant in the room” with a whopping trade imbalance facilitated in part by the country’s currency manipulation. The U.S. imports about $450 billion of goods from China each year with just $116 billion of U.S. products shipped to China, creating a huge trade deficit. She said Wal-Mart would like to help drive more exports to China given the burgeoning middle class there. However, she said the puzzle is in figuring out how to boost exports to China given the anti-dumping duties and currency manipulation that make it difficult to export to China.

“We need remedies to equalize the cost of products which would mean more goods are sold abroad,” she added. “The hope is we will have some pragmatic changes to bring trade back to the middle.”