Economic conditions in four Arkansas metro areas were mixed in the final quarter of 2016, with the Northwest Arkansas and Fort Smith metros ending the year on a positive note relative to the third quarter.

Jeff Collins, the economist for Talk Business & Politics who gathers data used in The Compass Report, said the star of the state’s economy continues to be Northwest Arkansas, with construction growth showing an impressive rebound.

Collins said the national economy continues to do well and that is providing more impetus for consumer spending. 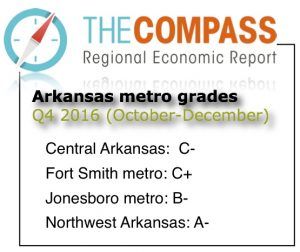 “Consistent improvement in the national economy has positively impacted consumer confidence. Despite the stubbornly high unemployment rates, consumer spending has been relatively strong. Real retail and food service sales grew at an annualized rate of 2.3 percent in December. Cheaper imports, rising incomes, and low energy prices have increased household buying power and this was reflected in the data,” Collins noted.

Following are some of the risks to the national and state economy, according to Collins.
• GDP growth will continue to depend on consumer willingness to spend. It remains to be seen if business investment will accelerate or continue to show mixed results. Analysts expect fiscal stimulus in the form of increased spending and tax cuts but the impact of both is at least a year out, assuming they occur at all.

• Any number of national or international factors could create reduce consumer confidence. This is particularly true to the extent that international events impact the equity markets. For some time terrorism had been the most likely threat but escalation of conflicts in the Middle East and the Korean peninsula are increasingly troubling.

• The structure of the economy will continue to move towards more automation. In addition, immigration policies which increase domestic production costs will accelerate the adoption of labor saving technologies.

• Proposed increased government spending does have the potential to create imbalances leading to inflation. In addition, protectionist policies designed to impact domestic employment would likely lead to price increases.

Helping to drive the slightly better gain was an improvement in the regional jobless rate, minor gains in regional sales tax revenue, rising construction activity, and continued growth in the region’s tourism industry.

Collins said the regional economy may have “right-sized” to a new level of post-Recession employment.

“The fundamental shifts in sector employment witnessed earlier have stabilized. The unfortunate aspect is that many people have left the labor force and perhaps the region as employment opportunities have disappeared. The current situation is an economy at or close to full employment. Tax collections and building permit data indicate solid economic activity.”

Pulling the grade down was a decline in job growth during the quarter, relatively flat sales tax revenue and declines on construction and manufacturing jobs. The number of jobs totaled 356,600 in December, below the 357,200 in December 2015.

“Comparing the fourth quarter to the same period for the previous year, sales and use tax data indicates that retail activity decreased for the metro area by approximately 0.7 percent. All of the smaller counties which comprise the Central Arkansas metro saw growth in quarterly collections.”

JONESBORO METRO
The region posted a fourth quarter grade of B-, down from the A- in the third quarter. The Jonesboro metro began its first quarter in The Compass Report with a B+ in the first quarter of 2016.

“Employment conditions in the metro are very good relative to the state and most other metro areas,” Collins noted. “The employment data are particularly encouraging given the erosion of manufacturing employment prevalent across many metros as well as the overall weak performance of the state economy.”

Sales tax revenue and building permit values also grew for the region in the fourth quarter although somewhat at a slower pace than in recent quarters. Sales tax revenue in Craighead and Poinsett counties was $2.308 million in December, just above the $2.264 million in December 2015. The number of building permits in the fourth quarter were up approximately 57% while the valuation of permits was up roughly 36%.