Conway-based Home Bancshares, parent company of Centennial Bank, will acquire Jonesboro-based Liberty Bancshares in a $280 million deal that will give the merged financial institution a statewide footprint of 92 branches and an overall banking operation with $7.1 billion in assets.

“This is a day of history being made in Arkansas,” Home Bancshares Chairman John Allison said at a press conference at the Little Rock Regional Chamber of Commerce.

“It’s a story of returning home and investing in Jonesboro,” said Allison, a Jonesboro native whose mother still lives there.

The deal is the largest in-state banking transaction in the history of Arkansas, according to officials and makes publicly-traded Home Bancshares the second largest bank holding company headquartered in Arkansas. Nearly 400 Liberty shareholders will receive $250 million in common stock and $30 million in cash as part of the transaction.

The acquisition is expected to close late in the third quarter or early in the fourth quarter of 2013 after necessary regulatory and shareholder approvals.

All told there will be 151 banking locations in Arkansas, Alabama and Florida. The combined banks will have $5.6 billion deposits, $4.5 billion in loans, and employ nearly 1,500 workers. Geographically, the bank will cover huge swaths of central, northeast, and northwest Arkansas and the River Valley.

Allison noted the “similar philosophies” the two banks share when it comes to community investment and banking operations.

“Seldom do you have two organizations that go together and don’t have duplication or problems with it,” said privately-held Liberty Bancshares Chairman Wallace Fowler. “It’s a perfect fit.”

The conversation leading to Monday’s announcement began less than four months ago, Fowler said, but Allison reminded an auditorium audience that relationship between Fowler and Allison started in 1965 when the two worked in retail stores in Jonesboro that were in close proximity.

Allison worked at a clothing store, and Fowler and his wife, Jama, had a furniture store on Main Street.

“We’d go from time to time and drink coffee at Douglas Drugs and sweep off the porches together in the morning,” Allison recalled.

“Wallace and I have been friends for many years and we’ve always talked about an opportunity of doing something together.”

Home Bancshares (NASDAQ: HOMB) stock closed trading on Monday (June 24) at $22.82 and was trading about 8% higher in aftermarket activity.  A map of the bank’s new Arkansas footprint is below. 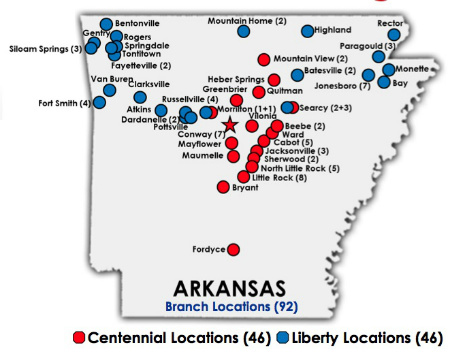