Permanent entertainment districts are now a reality in downtown Fort Smith and Chaffee Crossing. The Fort Smith Board of Directors on Tuesday (Sept. 1) approved the districts, and added emergency clauses to allow for immediate use by groups and businesses.

The Chaffee Crossing district was also a 6-1 vote, with Dawson abstaining. Vice Mayor and Director Kevin Settle said creating the downtown district represents a “great opportunity” to change downtown Fort Smith, noting that businesses will most likely “police themselves” to ensure the district is not abused.

“We’ve always talked about turning it into a true entertainment district and here we have an opportunity to really flourish and blossom to that opportunity,” Settle said.

The emergency clause was enacted to take advantage of weather, help businesses who want to move as soon as possible, and help businesses hurt by the pandemic, Settle said.

The 2019 Arkansas General Assembly adopted Act 812, which makes it lawful for cities to designate “entertainment districts” where patrons can walk outside a bar or restaurant with an open container of alcohol for public consumption. The act intends to “promote hospitality and tourism by establishing areas of a city or town that highlight restaurant, entertainment, and hospitality options,” Fort Smith Deputy City Administrator Jeff Dingman noted in a memo. 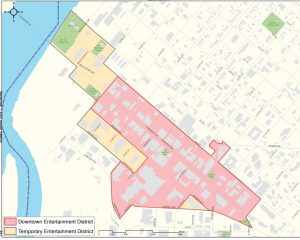 The permanent downtown entertainment district recommended by the CBID would include part of the area marked as the temporary entertainment district downtown, but not all of it. It would include areas on both sides of Garrison Avenue from Third to 13th Street and Gateway Park as well as North A Street from Third to 13th and Rogers Avenue from Third through Gateway Park. It would also include jags to the north of that area to incorporate Brunwick Place and to the south to include The Bakery District. The area was amended to also include TempleLive at 200 N. 11th St.

The permanent district does not include the River Park, Harry E. Kelley Park, Ross Pendergraft Park or any of the area west of Third Street toward the Arkansas River. Dingman said the area would include most of the bars and restaurants with a liquor license in the downtown area.

According to the proposed ordinance, all alcoholic beverages sold as allowable for consumption within the permanent entertainment district must be in a paper or plastic cup, no larger than 16 fluid ounces, that has a name or logo of the establishment or event has been professionally printed. No alcoholic beverages in bottles, glass or cans will be permitted for sale or consumption outside of establishments in the district.

Dingman noted that a permanent district is not event driven, and in downtown Fort Smith, has a smaller footprint than the temporary area. The first test case for the temporary district was to be the Steel Horse Rally set for early May but the event was cancelled because of COVID-19, Dingman said.