Reported COVID-19 hospitalizations in Arkansas hit a one-day record Friday (July 24), as the number of new known COVID cases was just under 1,000. The number of reported deaths – 394 – surpassed projections from the Institute for Health Metrics and Evaluation (IHME).

Most of the 17 new hospitalizations reported during Gov. Asa Hutchinson’s daily COVID-19 briefing are in four hospitals. There were four in Washington Regional Medical Center in Fayetteville, four in Baptist Health-Fort Smith, three at Baptist Health-Little Rock, and three at Northeast Baptist in Jonesboro.

“So you can see from that, that it’s spread out around the state, which is good news, and doesn’t strain our capacity to a great extent,” the governor said. 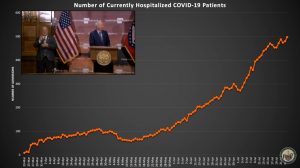 Gov. Hutchinson said state officials are working to learn more about the large number of cases in rural Newton County, but said the test data suggests it could be from a nursing home or some other single location. A reporter noted during the Q&A that a nursing home in Jasper, the Newton County seat, had in previous days reported up to five cases in the facility. The governor said new cases in a low-population county – 7,753 according to the 2019 Census estimate – show that the virus can appear anywhere.

“The fact is, when you have 55 cases in Newton County, one of the most rural parts of Arkansas, everybody has to be mindful there is not any area of the state that is exempt. … The risk is broad-based across the state, and because we’re testing a lot, we’re catching it.” Gov. Hutchinson said.

The governor also reported that 8,015 tests were conducted in the previous 24 hours. The test numbers are a big jump from the previous week when commercial lab testing numbers were down. Gov. Hutchinson said the increased testing “gets us back on track in terms of our testing that we expect.”

Death numbers at 394 are higher than the 389 deaths predicted by modeling from the IHME at the University of Washington. The closely watched IHME model predicts 895 COVID-19 deaths in Arkansas by Nov. 1, with that number falling to 611 with “universal” use of facial coverings. The death estimate is up from early July when the IHME predicted 724 deaths by Nov. 1.