American Transportation Research Institute (ATRI), the research organization of American Trucking Associations, recently released a report about how much money toll facilities generate and how much is reinvested into the facilities. The report also looks at how much trucks pay in tolls compared to their usage of toll roads.

The Arkansas Trucking Association has opposed tolling as a source of infrastructure funding and cited the new research that studies 21 toll systems, which comprise about 81.7% of all U.S. toll collections. The toll system operators collected more than $14.7 billion in revenue with nearly half of it going to other uses, the report shows. It also noted that toll revenue has increased by more than 72% over the past 10 years, while inflation increased by 16.9%.

The report used truck GPS data to quantify how tolling impacts the trucking industry, from shorter trips within a state to interstate commerce. About 79% of trucks included in the study used toll roads for interstate commerce, generating $3.33 billion in toll revenue.

“Trucking is highly motivated to support the best infrastructure our nation can afford for the safety of our workforce, the success of our economy and the well-being of all the communities who depend on our trucks to travel the highways, but funding that infrastructure should be smart, efficient and transparent,” said Shannon Newton, president of the Arkansas Trucking Association. “The research shows that tolling does not achieve those ends.”

Toll costs for commercial vehicles were 45 cents per mile, and the only cost that exceeded this amount was driver wages, which were almost 60 cents per mile, according to ATRI’s 2019 report on operational trucking costs. Trucks pay about 15 cents per mile for transportation-related federal and state taxes and fees.

Trucks pay about $4.2 billion in tolls annually to the 21 toll systems listed in the report. Meanwhile, trucks have also paid $811 million per year in federal and state fuel taxes.

Of the $14.7 billion in toll revenue, $4.76 billion or nearly one-third of the revenue has been used to cover facility costs, according to the report. About $2.32 billion, or 15.8% of the revenue, was spent on toll collection costs.

About half of toll revenue goes to uses other than the operation of toll roads and bridges, the report shows. More than 48%, or $7.1 billion, of the revenue remains after meeting the costs of the toll systems and interest, and the report noted this as positive cash flow or profit. The trucking industry paid $2.03 billion, or 28.5% of that amount.

About $3.01 billion, or 20.5% of the toll revenue, was transferred from nine of the 21 toll systems to other government agencies, including mass transit and transportation not related to toll facilities. The toll systems received more than $1 billion in cash from other agencies, and 17.5% came from a federal interest rate subsidy known as Build America Bonds.

Toll facility operators oversee about 6,000 miles of roadway and collect about $18 billion in toll revenue annually. Comparatively, the National Highway System includes 220,000 miles of roadway, and in 2017, the Highway Trust Fund Highway Account had revenues of about $35 billion from taxes paid by U.S. motorists. The National Highway System receives $159,091 in annual revenue per mile, while toll roads receive $3 million, according to the report.

When reached for comment on the report, Jack Damrill, director of communications and facilities for Oklahoma Turnpike Authority, declined to comment. 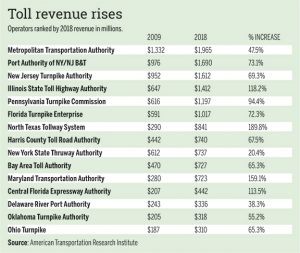 Damrill noted that the state agency’s bond rating has helped to keep operational costs low and kept it from having to raise tolls continuously. In July, Oklahoma Turnpike Authority raised its tolls for cash customers by 2.5%. It previously increased tolls in 2018, 2017 and 2009. The recent increases were expected to help pay for the Driving Forward Program that added two turnpikes and expanded others, Damrill said, adding that traffic on the toll roads has also risen.

Oklahoma Turnpike Authority wasn’t listed in the report as one of the nine toll operators that transferred out money to other governmental organizations. The agency’s 2020 budget shows the nearly $47 million annually that it receives from fuel taxes goes to the Oklahoma Department of Transportation. Since 1992, all of the fuel tax receipts have gone to the Oklahoma Department of Transportation, and this has accounted for more than $950 million. If needed, this money that flows through the Oklahoma Turnpike Authority could be used to pay its debt, and as a result, this improves the agency’s bond rating. The agency also gives $20 million annually to the Oklahoma Highway Patrol for the officers who patrol the toll roads.

ARKANSAS TOLL STUDIES
Arkansas has completed multiple studies looking at establishing toll roads in the state, but they have yet to show that a toll road project would be feasible.

“We’re not opposed to tolling in Arkansas,” said Randy Ort, assistant chief for administration for Arkansas Department of Transportation (ArDOT). “It’s just that we’ve never had a project that was completely feasible as a toll road.”

Ort compared building a toll road to wanting to buy a $1 million home with a mortgage, but it’s a house one can’t afford. The state must take on debt to build the road before it can start collecting money from the tolls. And like the $1 million home, the project must be affordable. The state cannot take on enough debt and charge a reasonable toll to pay for the project.

In late 2018, the state determined that a toll road wouldn’t be feasible to complete a 13.7-mile segment of Interstate 49, between Interstate 40 in Alma and Arkansas Highway 22 in Barling. The segment would also include a bridge over the Arkansas River.

ArDOT has been hosting meetings across the state on the half-cent sales tax. If approved, the tax would be permanently extended, and 76% of receipts would go to the preservation of existing roads and bridges. The remainder would go to new projects, such as the two-lane I-49 project south of I-40. The next meeting on the tax will be at 5:30 p.m. March 9 at the Jess Odom Community Center in Maumelle. At 5:30 p.m. March 10, ArDOT will host a meeting at the Jones Center in Springdale.