For the last 10 years, Arkansas’ population has been slowly growing, becoming more suburban, and shifting from the southeast to the northwest. The effects have been broad and obvious. But they have taken place over time. After a new census in 2020, Arkansas will experience a more abrupt change – Congressional and legislative redistricting.

Redistricting is, to put it very mildly, complicated. At its heart, it’s a counting exercise with the goal of equal population apportionment per legislative district. But layered on top of all that is a healthy dose of federal and state case law, issues surrounding race, and electoral politics – even considering the home addresses of incumbent politicians.

The remainder of this article will focus on congressional redistricting. In our next column, we’ll talk about potential changes to the Arkansas Senate.

Preparation for the 2020 decennial census is well underway. But the date that populations will be based on is April 1, 2020. Final population figures have historically been delivered to the legislature early the following year (2021). These are the numbers legislators will be held accountable to throughout the process. Arkansas law doesn’t establish a hard deadline for adopting new congressional boundaries, but there is substantial motivation to settle on boundaries during the regular session in plenty of time to plan for the next election cycle. 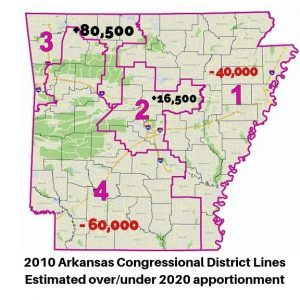 As a rule, congressional districts may differ by no more than 1% in population to withstand legal challenge. For the next redistricting this is going to equal a number very close to 760,000 residents per district. For Arkansas’ growing congressional districts (AR02 and AR03) this means shedding residents and becoming more compact. For districts with a declining population (AR01 and AR04), it means adding those same residents and continuing to sprawl across the state.

When we look at redistricting at the congressional level, we see two districts adding population and two shrinking. But a closer look reveals that growth is at the city level within those districts. It’s not that the “3rd Congressional District” is growing. It’s that Bentonville, Springdale, Fayetteville, and Rogers are growing. In fact, seven of the nine counties in AR03 have essentially flat population growth. In the slower growing AR02, three of the seven counties are losing population. And if not for Jonesboro’s growth, AR01 would’ve lost as many people as AR04. The divide is rural and suburban/urban. In our next column, we’ll see how that divide effects state senate seats throughout Arkansas.

Following is my analysis on each district.

• Congressional District 1
During the last 10 years this district has lost approximately 40,000 residents. If not for the growth of the Jonesboro MSA, the losses would’ve been substantially greater. If the changes proposed above take place AR01 will include more than 30 Arkansas counties, and include Lake Chicot in the southeast and Bull Shoals in northwest Arkansas.

By adding Marion and Van Buren counties, this district will be close to full apportionment. We could see the splitting of some counties from the 1st, 2nd, or 4th to round out the needed population.

• Congressional District 2
Arkansas’ 2nd Congressional District also has a surplus of residents although it has grown at a much slower rate (6.5%) than the 3rd. This will need to shrink by 16,000 residents. These residents will most likely move to AR01. A convenient place to find those 16,000 folks is Van Buren County. Van Buren County would then join its neighbor, and Greers Ferry Lake oriented counterpart, Cleburne County, in AR01.

While the 2nd district will likely change the least among Arkansas’ four congressional districts, its small changes will have political consequences. Most recently, AR02 has been the most politically “competitive” district. In 2018, U.S. Rep. French Hill, R-Little Rock, netted 4,500 votes in reliably republican Van Buren County. Under this scenario those votes would leave, making the seat more competitive. However, those 4,500 votes only made up about a quarter of his 16,000 vote margin of victory.

• Congressional District 3
Arkansas’ 3rd Congressional District is the state’s fastest growing with an increase of almost 120,000 people (15%) since 2010. That means the 3rd district will need to send approximately 80,000 residents to the 1st and 4th congressional districts. There are a few ways to accomplish this cleanly that align with state and federal redistricting laws: Marion County (16,000 people) moves to AR01; and Pope County (65,000 people) moves to AR04, OR an equivalent population from Sebastian County is sent to AR04.

• Congressional District 4
The 4th congressional district has the unfortunate distinction of having lost the most residents (60,000) of Arkansas’s two declining districts. What is doubly unfortunate (at least for traveling congressional staff) is that what it loses in population it will have to more than make up for in geography. The 4th district will also include more than 30 counties. Despite needing to add 60,000 new residents, the changes could be relatively straightforward without much political consequence.

As mentioned before, the major question is “where will AR04 take people from AR03?” The boundary could move north into Sebastian County until it would likely split Fort Smith. However, the cleaner option is to take all of Pope County – which would provide almost the exact number of new residents needed.

Congressional redistricting is a complicated and messy endeavor powered by data but filtered by politics. The above scenarios are relatively straightforward solutions that achieve 95% of what the legislature is tasked with doing. Obviously, the details of that remaining 5% will be of great interest to a number of political stakeholders.

There is also a scenario where the legislature sees fit to take the “etch-a-sketch” approach. They could shake the entire state until the lines disappear and then redraw them, making major changes not contemplated here. While that approach has some appeal to political spectators and commentators, it would be extremely disruptive to countless projects and organizational relationships. This is one case where Arkansans are probably best served by working to maintain the status quo.

Editor’s note: Jamie Gates, executive vice president of the Conway Development Corp., is a monthly Talk Business & Politics contributor with his column, “Data Points.” Gates will explore data related to Arkansas’ population, economy and demographic trends. The opinions expressed are those of the author.