Business leader Randy Zook said negotiations between the U.S. and China won’t be resolved soon, but he believes the end result will be better for the American consumer.

Zook, president and CEO of the Arkansas State Chamber of Commerce and Associated Industries of Arkansas, said he doesn’t see a quick resolution to the escalated trade war.

“This is a long game. We’re not going to get this done in the next six or 12 months. We may see progress, and boy I hope we do,” Zook said.

“I think the best thing that could happen in the near-term is passage of the U.S.-Mexico-Canada Agreement, the replacement for NAFTA. That would be a big signal and a great move for the Congress to make, and we need them to do that as soon as possible. We’ve got a new agreement with Japan. There are other opportunities around the world, likely with the U.K. and South Korea,” he added.

Zook, a former manufacturing executive, said that decades of an imbalanced relationship with China needed to be corrected. He’s not sure if a different tactic could have jump-started a reset of the trade table.

“I don’t know of a different weapon or technique you could have used to move it in a way that would make them come to the table, so it probably has worked out to be pretty good,” he said. “And there are some realignments in supply chains all over the world that are taking place as a result of this. I think, long-term, they’re going to be more favorable to the U.S. and to the U.S. consumer.”

Zook also discussed immigration, the controversial topic that has divided the country over border control and workforce challenges.

The chamber chief said that an improved E-Verify system is crucial to improving the immigration process. Calling the current system “basically worthless,” Zook said that businesses should be held accountable if they allow illegal immigrants to work at their businesses.

“Absolutely,” he said of a recent raid on several factories in Mississippi. “They were clearly out on the fringe of abusing the system. But a working, accurate E-Verify system to make sure that the Social Security number you put down is indeed yours and not somebody who’s been gone for awhile, or somebody already still in the economy, would go a long way to give employers the tool they need to have some reasonable level of certainty that you’re okay to put to work.”

As to whether or not a solution to illegal immigration can be reached that would accommodate partisan positions, Zook said, “I think the root of it is political. It’s not economic, it’s political.”

BE PRO, BE PROUD
This past week, the State Chamber and its partners launched an upgraded initiative to boost workforce education across the state. Through a nonprofit consortium, the chamber has spearheaded the “Be Pro, Be Proud” campaign for several years. The 2.0 version of the program was revealed Thursday (Sept. 5). 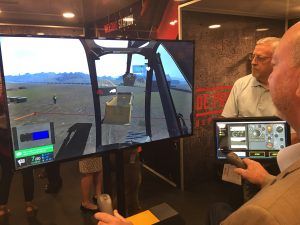 It primarily involves a 18-wheeler that’s 53 feet long and tricked out with a variety of stations that include simulators, virtual reality headsets and educational videos.

The truck books stops at schools around the state to allow students who may not plan to attend a four-year college with the job possibilities that exist with high school degrees or two-year degrees. Many of those jobs are in the field of construction, utilities, transportation and manufacturing. 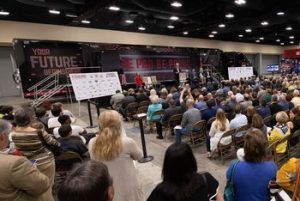 Zook said “Be Pro, Be Proud” is one-of-a-kind and he hopes that other states will borrow the idea.

“We had people from four states yesterday taking a look at it, and considering doing something exactly like it under a license from us. So it could become a national thing and certainly by then it needs to be more than the Arkansas State Chamber of Commerce,” he said.

Measuring eventual outcomes is tough, Zook said, because there’s not a great tracking mechanism to see if “Be Pro, Be Proud” was the catalyst for a career choice for someone. However, he said there have been about 60,000 students who have moved through the original vehicle’s 250 stops since the initiative launched more than three years ago.

You can watch Zook’s full interview below.