State elected officials of the present gathered across the street from the capitol to honor one from the past on Wednesday (July 31).

Gov. Asa Hutchinson, Lt. Gov. Tim Griffin, and Attorney General Leslie Rutledge were among the state dignitaries who attended a commemoration ceremony to rename the National Old Line Building for former Gov. Winthrop Rockefeller. Members of the Rockefeller family, including Lisenne Rockefeller, Win Rockefeller, Jr. and Will Rockefeller, participated in the event.

Hutchinson noted Rockefeller’s contributions to the state as Arkansas governor from 1967-1971. He highlighted the former governor’s legacy of economic development efforts, prison reform, expanding the Freedom of Information Act, and improving race relations.

“Those four things are historic in proportion and lasting in impact,” Hutchinson said.

The six-story building directly across the street from the front steps of the state capitol was used by Rockefeller as his residence early in his administration when the Governor’s Mansion was undergoing renovations.

Originally built for an insurance company bearing its name, today it is home to several state agencies and the Arkansas State University System offices. The Arkansas State Building Authority manages the building. It was recently added to the National Historic Register.

Legislation championed in the most recent session by State Sen. Mark Johnson, R-Little Rock, renamed the building the Winthrop Rockefeller Building. Ironically, Johnson’s father, Jim Johnson, was the Democratic nominee against Rockefeller when Rockefeller, a Republican, won his first term in the 1966 general election.

“This closes the circle,” Johnson noted. “It honors a time when our state underwent transformation.” 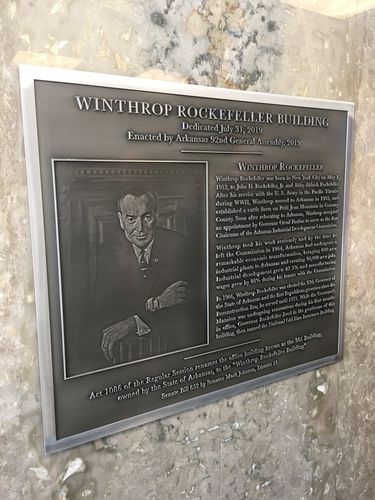