OGE Energy Corp., parent company of the utility providing electricity to large parts of the Fort Smith metro, reported first quarter net income of $47.1 million, below the $55 million in the same quarter of 2018, but in line with what analysts expected.

The earnings report was posted Thursday (May 2) before the markets opened.

OG&E generated 10 cents of the per share income, down from 16 cents per share in the same period of 2018. The company cited higher expenses related to “timing of certain projects” and “lower allowances for funds used during construction as key environmental investments were placed into service,” as some of the reasons for the lower income of the OG&E division. 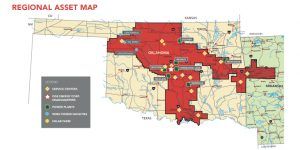 Subsidiary company Natural Gas Midstream Operations produced 11 cents per share, or $22 million, down from $24 million in the same quarter of 2018. Higher pension settlement charges helped lower net income in the quarter, the company noted in the report. The holding company posted per share earnings of 3 cents.

“Both the utility and midstream businesses had solid first quarters and are on plan for the year,” OGE Energy Corp. Chairman, President and CEO Sean Trauschke said in the earnings report. “With our large environmental investments complete, we look forward to continuing to enhance the customer experience through investments in technology and the electric grid.”

OGE Energy, which employs around 2,300 people and provides energy services in a 30,000-square-mile area in Oklahoma and Arkansas, has a generation capacity mix of 55% natural gas, 38% coal and 7% renewable.