EDITOR’S NOTE: The following story appeared in the Oct. 1 issue of the Northwest Arkansas Business Journal. “Then & Now” is a profile of a past member of the Business Journal’s  Forty Under 40 class.

In 2000, Haworth was senior vice president of operations for Sam’s Club when he was named to the Northwest Arkansas Business Journal’s Forty Under 40 class. He ultimately reached Walmart’s No. 2 position as executive vice president and chief operating officer before he moved to China in early 2005.

Haworth was president and CEO for Shanghai-based retailer CP Lotus for more than five years and worked to turn around the company with stores throughout China. He went on to become the company’s chairman.

“It was one of the most satisfying times in my career,” he said.

In 2010, Haworth returned to the United States after being recruited to Chicago-based Sears Holdings Corp. as its president of retail services and transformation officer. He was responsible for both the company’s retail formats, Sears and Kmart, and the direction in which to take the company. A year later, though, he had the opportunity to follow one of his passions — the western lifestyle.

Haworth was approached by private equity firm Spire Capital, which had purchased Pueblo, Colo.-based sports organization Professional Bull Riders (PBR), and was asked to be its chairman and CEO. He joined in early 2011 when the equity firm was interested in selling the organization, which operated in five countries, hosted 300 events worldwide and aired on CBS television networks. In 2015, William Morris Endeavor-International Management Group, the owner of UFC, purchased the organization.

Haworth, who is 56, remained as chairman until August 2016, when he was hired as president and CEO of Outdoor Cap. At the time, company founder Paul Mahan had been looking for a new CEO, and Haworth had known Mahan for about 25 years. Haworth had settled down at the Oklahoma ranch he’s owned for 16 years, but he wasn’t ready to retire.

The opportunity to work at Outdoor Cap allowed him a business challenge in an exciting time, and it was close to home. At Outdoor Cap, unlike some of his previous roles in which he was hired to turn around a company, he’s responsible for leading and growing an already successful business that sells more than 30 million hats annually. Haworth declined to release revenue numbers or growth percentages, citing the company as privately-held. Outdoor Cap has about 370 employees. 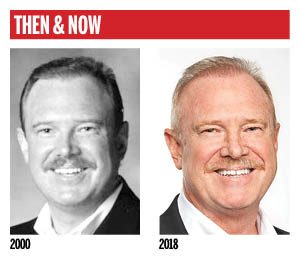 “We’re focused on headwear,” he said. The company offers promotional products, has relationships with sports and outdoors organizations such as Major League Baseball, Mossy Oak and Realtree, and sells its products to retailers like Walmart, Bass Pro Shops and Academy Sports + Outdoors.

Outdoor Cap products can be a mixture of caps with or without embroidery, and the company has the ability to embroider caps in Bentonville for orders that require a quicker turnaround. One of the company’s fastest growing segments is domestic embroidery, Haworth said. The caps are manufactured overseas and shipped to distribution centers in Bentonville, Dallas or Rancho Cucamonga, Calif., before they are sent to customers.

Haworth said the company was concerned about tariffs, but the majority of its manufacturing base is not in China. Outdoor Cap headwear is also manufactured in Vietnam and Bangladesh.

Over the next several years, Haworth hopes to expand the headwear business, market its promotional products, add licensed products for retailers and improve design processes. The company has developed a software with the ability to change patterns and logos digitally. Last year, the company purchased Bentonville-based headband company JUNK Brands, and the company also offers headwear customers the ability to purchase through its Banner & Oak brand.

“We’re going to continue to look for acquisitions that make sense,” said Haworth, adding that the focus will remain on headwear.

When asked about his career highlight, Haworth explained it’s been the opportunity to be involved with many business types and the people he’s been able to work with internationally and in the United States.

He’s a board member for Houston-based home appliance retailer Conn’s HomePlus, the Police Athletic League and Aim for Advocacy. He raises cutting horses and Angus cattle on his Oklahoma ranch where he and his wife, Kathy, have lived for the past two years.