SWEPCO, a subsidiary of Columbus, Ohio-based American Electric Power, has asked the Arkansas Public Service Commission for approval for Arkansas elements of the $4.5 billion project that includes the purchase of a 2,000-megawatt wind farm under construction in the Oklahoma Panhandle, and construction of a 360-mile transmission line to Tulsa, where the existing electrical grid would deliver wind energy to customers. SWEPCO would own 70% of the project, and its sister company, Public Service Co. of Oklahoma, would own 30%. SWEPCO Arkansas is investing $607 million into the project. Approval is still needed from utility commissions in Arkansas, Louisiana, Oklahoma and Texas, and the Federal Energy Regulatory Commission.

Bentonville-based Walmart Inc. and Arkansas Attorney General Leslie Rutledge have thrown their support behind the project. The city of Fayetteville and Walmart have goals to be supplied by 100% renewable energy. The Wind Catcher project would allow the city to improve to 43% clean energy by 2021.

“Sourcing from wind energy projects — like the Wind Catcher project — is a core component in the mix,” Mark Vanderhelm, vice president of energy for Walmart, said in a Feb. 20 statement from SWEPCO. “The energy procured from this project represents an important leap forward on our renewable energy journey.”

PROTECT OUR POCKETBOOKS
Not everyone is on board with the project. Protect Our Pocketbooks, a group with an unknown source of funding, has paid for production and air time of television ads to oppose Wind Catcher.

“Protect our Pocketbooks supports clean energy, but we believe that energy infrastructure investments should be made locally. Wind Catcher creates jobs and infrastructure in Oklahoma with no local benefits,” the organization notes on its website. “Four thousand construction jobs – in Oklahoma. Eighty permanent jobs – in Oklahoma. Millions in tax benefits – for Oklahoma. Nothing for Arkansas or Louisiana – except the bill to pay. We don’t need to import electricity. Locally generated electricity keeps prices low AND keeps jobs and tax revenue in our communities.” 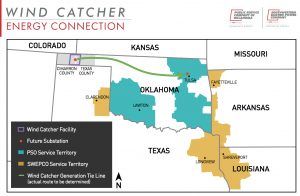 “A group known only as Protect Our Pocketbooks – which does not reveal the names of its backers or the sources of its substantial funding – is presenting misleading information to the public, including manipulation of statements by Arkansas Gov. Asa Hutchinson,” Brian Bond, SWEPCO vice president of external affairs., said in a statement sent to the media on Tuesday (March 6).

“The anonymous, tax-exempt opposition group claims that Arkansas gets none of the benefits of the project, which is incorrect and misleading. Arkansas will receive the benefits of generation with no fuel costs, cost savings immediately and over the life of the project, the full value of the federal Production Tax Credits available to the project, and the economic development benefits of wind turbine components being manufactured in Arkansas,” Bond said.

SWEPCO officials say Wind Catcher will result in $4 billion in customer savings over the 25-year life of the wind farms in Oklahoma.

Justin Allen, an attorney with the Little Rock-based law firm of Wright Lindsey Jennings, and spokesman for Protect Our Pockets, told Talk Business & Politics the group had no comment to SWEPCO’s March 6 statement.

OTHER OPPOSITION
Protect Our Pocketbooks is not the only opposition group to form against Wind Catcher. Renewable Arkansas, a non-profit project of Americans for Affordable Energy, has also become active as of late. The group contends Arkansas officials should support investment into renewable energy development in Arkansas rather than shipping renewable energy into Arkansas from other states.

“This is not an Arkansas vs. Oklahoma or a wind vs. solar debate. It is all about what is best for Arkansas, and Wind Catcher is not the best option for us. Why import wind from Oklahoma when we should be building our own solar generation that will provide jobs and revenue for communities here in Arkansas?” noted Grant Tennille, spokesperson for Renewable Arkansas, in a recent commentary submitted to Talk Business & Politics.

Tennille served as director of the Arkansas Economic Development Commission from 2011-2014. Renewable Arkansas is non-profit project of Americans for Affordable Energy.