The White House announced Thursday (June 29) that J. Cody Hiland of Conway will serve as U.S. Attorney for the Eastern District of Arkansas, if he is confirmed by the U.S. Senate.

Hiland serves as Prosecuting Attorney for the 20th Judicial District of Arkansas, which comprises Faulkner, Van Buren and Searcy counties. He has been in the elected position since .

Hiland is a former partner at Hiland, Thomas & Cox, PLLC in Conway. He also previously served as staff attorney and rural and community liaison for the Arkansas Public Service Commission; program director for the Arkansas Transitional Employment Board; and legislative liaison and aide to Governor Mike Huckabee.

Hiland graduated from the University of Central Arkansas and the William H. Bowen School of Law in Little Rock.

He will replace Chris Thyer in the post. The U.S. Attorney’s Office (USAO) Eastern District of Arkansas includes five divisions and 41 counties in the state. It is responsible for representing the federal government in virtually all litigation for this district, including criminal prosecutions for violations of federal law, civil lawsuits by and against the government, and actions to collect judgments and restitution on behalf of victims and taxpayers.

Both U.S. Sens. Boozman and Cotton said they supported Hiland for the post. 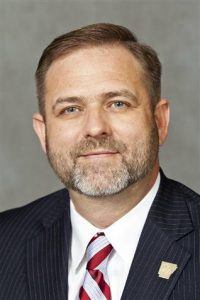 “Cody is an excellent choice to serve as U.S. Attorney for the Eastern District. He brings years of legal experience to the table and an exceptional track record as a successful prosecutor in north central Arkansas. Senator Cotton and I will work with our colleagues to get Cody’s nomination confirmed as quickly as possible so he can begin working to make our communities safer,” Boozman said.

“J. Cody Hiland is the absolute best choice for this position, and I commend the president for making this appointment. He is well respected both among his colleagues and in the community at large. He has extensive experience in the law, which he will put to good use for the people of Arkansas. I will continue to work with Senator Boozman and my colleagues to make sure the Senate gives him a speedy approval.”

Duane “Dak” Kees is expected to be nominated to the U.S. Attorney post for the Western District of Arkansas, Talk Business & Politics reported three weeks ago. Sources confirmed that Kees is the nominee, but official word has not been disclosed.

Kees, director of global ethics governance, anti-corruption at Wal-Mart Stores, has been with the retailer since 2014. He began his legal career with the U.S. Army. His service included a 12-month deployment to Afghanistan and a 15-month deployment to Iraq. Kees was awarded two Bronze Stars during the deployments.

He also worked as an adjunct professor at the University of Arkansas School of Law (July 2013-June 2014), and between October 2009 and July 2013 was a partner in the Asa Hutchinson Law Group.