While the news is good that China has agreed to open its markets to U.S. beef, don’t expect products from meat packers like Tyson Foods and local cattlemen to enter that market anytime soon.

The U.S. beef industry applauds the opening of China for U.S. raised beef products, an announcement made Monday by the U.S. Department of Agriculture. China has been closed to U.S. beef since 2003.

The terms of the deal which include full animal traceability back to the farm, no growth promotion agents used in the production cycle and cattle being under 30 months of age will take time to muster.

“The door may be open but you have to be dressed a certain way to go inside,” said Travis Justice, director of commodity and regulatory affairs for the Arkansas Farm Bureau. “Now that we know the rules we’ll have to revamp our playbook before we can play ball with China.”

The market is open and buyers have expressed interest in U.S. product for many years so there is no shortage of demand, but there are several factors that will keep exports on the low side for the near term. He said the 30-month age rule is not a problem, but a vast majority of the national herd is not traceable back to the farm of origin and the use of growth promotion agents is also high. Both will have to be changed before cattle can meet the criteria, Schuele said.

He said beta agonist — a feed additive that increases feed efficiency — is not allowed in beef bound for China. The industry estimates between 60-80% of the U.S. herd has been raised with beta-agonist, and that alone is a disqualifying factor.

Justice said full traceability is likely going to be last of the criteria to fall in line given the complexity involved. He said unlike other exports of manufactured items assembled in plants, the cattle are dissembled into 200 parts and sent to various countries. He said each calf may actually have parts going to five or six different countries and keeping those records maintained is going mean more work and require a premium for the meat involved.

Schuele said the market will dictate how much beef is sent to China. He said if the beta-agonist and growth hormones that increase feed efficiencies are abandoned it will take more feed to finish an animal ahead of slaughter and that will raise input costs which will require higher prices. He said China will randomly test U.S. beef shipments for traces of growth agents and if found, the product will be rejected. 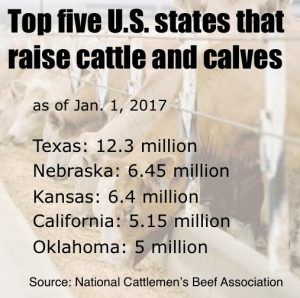 “U.S. packers will have to comply with those terms,” he said. “Several packers have already requested their plant export certifications from USDA and that will have to be in place before any beef can be sent to China.”

Michael Martin, a corporate spokesman for Cargill, said any beef Cargill ships to China will comply with all the requirements of the agreement. He also acknowledged that only a small percentage of the total U.S. cattle supply will qualify for beef products exported to China under the terms of the agreement.

Tyson Foods, also a major U.S. beef packer, declined to comment on the opening of the China market. Tyson Food’s beef division slaughters an average of 125,000 head per week, which is then processed in its eight beef packing facilities. As of June 2016, Tyson had 24% of the U.S. beef market share, JBS USA was next with 22% and Cargill held a 19% market share.

Schuele said when the beef market closed to China in 2003 the U.S. had 75% of the $65 million market. Today that market has grown to more than $2.6 billion and Australia, Uruguay, Argentina, Brazil and Canada have been battling it out for market share. He said it is uncertain how long it might take U.S. packers to regain some of the market it lost 14 years ago. He said how quickly the U.S. can grow the eligible supply will be one of the biggest factors that determines the success of this deal.

“The U.S. is not looking to rise to the top, but we just want to capture a higher-end niche market in retail and restaurants. If that can happen this market opening will be successful. The wildcards will be how much China wants the product given their requirements will mean the cost goes up,” he added.

Justice said just 14% of U.S. beef is exported abroad and that equates to $270 per head. If the U.S. is eventually able to gain back substantial market share in China he believes that will add another $50 per head. He said the 300 million higher net worth Chinese consumers is like having another United States to market product to once all the hurdles have been cleared.

Philip Seng, CEO of U.S. Meat Export Federation, said there will be a period of adjustment for the U.S. beef industry to comply with the requirements in the deal.

“China holds exciting potential for the U.S. beef industry and for buyers in the market who have waited a very long time for the return of high-quality U.S. beef,” he added.