Public library visits per capita have increased 83% in Arkansas during the past 20 years, despite a national decline in the print publishing industry over the last decade.

Close to a quarter of public library collections budgets are now spent on electronic books, both nationwide and in Arkansas, according to the latest available Public Libraries Survey (2014) from the Institute of Museum and Library Services.

Programming at libraries has increased since the IMLS started tracking it in 2010, public computer access has become a basic right for users, and libraries are starting to invest in science labs and maker spaces. In the face of technological advances that could pose a threat to libraries’ existence, those institutions adapted, said Julie Todaro, president of the American Library Association. It’s what libraries have done for decades.

“Staying relevant has been an ongoing transition, and the mission of libraries has stayed the same,” she said.

Libraries have always been more than a storehouse for printed material, she added, and their mission is to educate and equalize access to information, research, culture and recreation.

“Libraries have always taken the pulse of their surrounding communities,” she said.

They provide appropriate services and resources that line up with the current climate and the needs of the community, and that includes access to modern technology, tracing back to when, for example, stereographic cards were on the cutting edge.
Most public libraries let individuals borrow laptops, tablets and other devices to use within the facility, and Bentonville Public Library users, for example, can now check out a 4.5-inch telescope for one week.

MAKER MOVEMENT
The Springdale Public Library recently bought a 3D printer and sewing machines to be used for programs within the “maker movement.” It also now offers themed take-home backpacks with STEAM-related (science, technology, engineering, art and math) games and toys, in addition to more traditional library items like books and movies.

Looking back to its roots in the late 1990s, Springdale Library Director Marcia Ransom said a growing focus on technology was challenging at first. In fact, the library waited until later than most (1998) to adopt a computerized system over the traditional card catalogue. 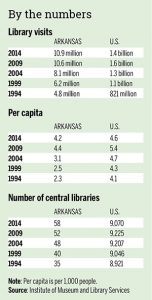 “We didn’t want to frighten people,” she said.

However, the automated system allowed individuals to use keyword and subject searches rather than just author or title, and it opened up possibilities for shortcuts for both consumers and library staff, an effect that was multiplied in a subsequent transition to an integrated library system, Ransom said.

As the community embraced technology, so did the library. Librarians needed to become quick experts on tech – and not just the tech within the library.

COMMUNITY HUB
Ransom said it’s a common occurrence for an individual to bring in his or her newly bought device and ask the staff, expected to be a knowledgeable source on all subjects, for help operating it. It prompted the library to purchase the latest devices solely for the purpose of staff training.

Now, librarians entering the workforce from college have extensive training in tech, and “are ready to hit the ground running,” Ransom said. That helps, she added, as the internet has driven a steady dose of incremental changes each year in the way the Springdale library functions.

Most libraries have subscriptions to multiple services like Overdrive and Flipster that provide remote access to thousands of electronic books, magazines, newspapers, audio books, reference materials and learning sites.

Though vast information on a given subject is now available through the internet, there is a benefit to having a live person to help guide an individual through the fact-finding process, said Laura Speer, program coordinator for children’s services at the Springdale library.

“If we don’t know something, we at least know where to find it,” she said.

Ransom wants the library to be a positive place, where all people can feel comfortable to come in and use the services. Ransom has led the facility in a direction that emphasizes user-friendliness, she said. She envisions the library as a destination, a hub for the community.

In Springdale, 36% of the population is Hispanic, and 7% is Marshallese, according to the latest U.S. Census estimates (2015), so the library offers programming and services specific to those communities, as it does for low-income families who use public library services because they are free, Ransom said. For that reason, she has made a directional decision to not be hawkish in issuing and collecting late fees.

In general, patrons are in good standing with the library if they bring back materials, and when that doesn’t happen, it is already accounted for in the annual budget.

“We are a lot like retail. We expect there will be some loss,” Ransom said.

PRINT POWERS ON
Arkansas’ public libraries logged 10.9 million visits in 2014, up from 10.6 million visits five years before. Nationwide, library visits were down slightly between 2009 and 2014, from 1.6 billion to 1.4 billion, and per-capita library visits declined by 0.8 and by 0.2 in Arkansas — a change that could be linked to an uptick in consumers accessing electronic materials remotely through downloading and streaming, according to IMLS.

Per capita library visits showed a significant jump in Arkansas from 1994 to 2014, from 2.3 to 4.2. There was also an increase on the national scale, from 4.1 to 4.6.
Meanwhile, there were 155 public library closings throughout the country between 2009 and 2014, although the number of Arkansas libraries increased during that time period, and the nation saw an overall increase since 1994, according to the Public Libraries Survey.

In addition to its new services and technological offerings, a large portion of inventory at most U.S. libraries is still books, which they lend out in the billions each year. In fact, print collection purchases still took up more than three-quarters of library expenditures in 2014. Librarians say many readers still prefer the experience of holding a book in their hands to read.

As a result, it seems libraries aren’t going anywhere.

In fact, there is talk of a planned small downtown branch in the works for the Springdale library, and the Fayetteville Public Library recently moved forward with plans to begin a $49 million expansion of its facility, paid for in part by a voter-approved property tax increase adopted in August.
––––––––––––––––––––––
Editor’s note: This story was first published in the May 1 edition of the Northwest Arkansas Business Journal.