The pace of tourism tax collections and travel and tourism jobs began to slow in the first half of 2016, but the industry is still on track for record growth.

For the first six months of 2016, hospitality collections in 17 Arkansas cities is up 3.77% compared to the same period in 2015, but down from the 5.57% growth in the first four months of the the year.

Collection of the state’s 2% tourism tax continues on a record pace with collections up 4.15%, according to The Arkansas Tourism Ticker.

In 2015, the Arkansas Tourism Ticker reported a 7.41% increase in hospitality tax revenue among 17 Arkansas cities reviewed for the report, an 8.31% increase in collections of the state’s 2% tourism tax, and a 5.04% increase in Arkansas tourism industry jobs compared to 2014.

The Arkansas Tourism Ticker is managed by Talk Business & Politics, sponsored by the Arkansas Hospitality Association, and is published every two months, or six times a year. The ticker uses the following three measurements to review the health of the state’s tourism industry.
• Hospitality tax collections – prepared food tax and lodging tax – of 17 Arkansas cities (cities listed below along with collections for each city);
• Tourism sector employment numbers as reported by the U.S. Bureau of Labor Statistics; and
• Collections of Arkansas’ 2% statewide tourism tax. 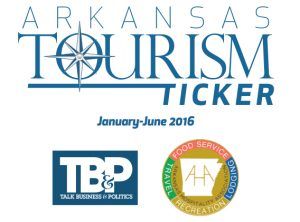 • 4.15% increase
Collections of Arkansas’ 2% statewide tourism tax during January-June 2016 compared to the same period in 2015.

• 4.62% increase
Increase in Arkansas’ tourism industry jobs in January-June 2016 compared to the same period in 2015

Joe David Rice, tourism director for the Arkansas Department of Parks and Tourism, has told Talk Business & Politics he believes the industry will continue to grow but may not be able to maintain the percentage growth posted in 2014 and 2015.

Maryl Koeth, executive director of the Van Buren Advertising & Promotion Commission, is not sure the numbers will hold up in the back half of 2016. She said recent discussions with those in the industry suggest 2016 may not be as robust as 2015.

“At the State Parks, Recreation and Travel Commission meeting last week several hotel and resort owners were saying they saw an atypical decline in July business along with the expected slowdown in August. The owners agreed that the unexpected July decline and a much better than average 2015 travel season will cause their numbers to be somewhat flat for 2016,” she told Talk Business & Politics.

For more travel and tourism data, link here for the PDF of the January-June 2016 Arkansas Tourism Ticker.