State Rep. Mike Holcomb of Pine Buff has changed his party affiliation from the Democratic to the Republican Party, the two-term legislator said on Thursday at Republican Party of Arkansas headquarters.

The RPA announced earlier in the day that a representative would announce a party switch along with Gov. Asa Hutchinson and state legislators.

“I’ve chosen to join the Republican Party because I firmly believe that the conservative values they represent best align with my own personal beliefs and convictions,” Holcomb said.

Holcomb noted in his remarks that the recent Democratic Party of Arkansas’ stance regarding Planned Parenthood and the state of Arkansas’ previous funding, which Gov. Asa Hutchinson called to end, was cited as a major reason for his switch.

“I believe in the sanctity of life. I believe in traditional marriage. I believe in helping Arkansans. Moving forward, I am excited to caucus and work with my fellow Republican legislators as we focus on Arkansas—her needs, values, and future,” Holcomb said.

Hutchinson said the state Democratic party could no longer distinguish itself from the national Democratic Party on issues like abortion and gay marriage. “They can’t make the case that there’s a difference any more,” the governor said.

His party switch is the first in Arkansas at the legislative level since then-Rep. Linda Collins-Smith converted from Democrat to Republican in 2011. Several locally elected officials have changed party affiliation this year.

Holcomb represents District 10, which includes parts of Lincoln, Cleveland, Grant, Drew and Jefferson counties. He spent 28 years in public education and is a past Jefferson County judge. He is vice chairman of the House Committee on Public Transportation.

“Today’s announcement by Rep. Mike Holcomb and Governor Asa Hutchinson was no surprise. In the last legislative session Rep. Holcomb caucused and voted with House Republicans. His change in party affiliation will not alter any legislative outcome.

“If standing against women’s health care including Pap smears, breast cancer screenings, STD testing and treatment, pregnancy testing, prenatal checkups, or the equality of all Arkansans is important to Rep. Holcomb, then he’s found a good home in the Republican Party of Arkansas.

“Asa Hutchinson was elected to represent all Arkansans, not just Republicans. Today’s announcement was beneath the office of governor, and a poor attempt to distract from the Medicaid crisis caused by the poor planning of the Hutchinson administration. Nearly 50,000 Arkansans were unfairly kicked off their private option health insurance plan which Rep. Mike Holcomb voted for three times. In 2014, hardworking Arkansans in District 10 braved a cold, rainy Election Day to cast their votes for a Democrat who would fight to save the private option.

“The Democratic Party of Arkansas believes everyone deserves access to affordable health care. We intend to give voters in House District 10 the opportunity to vote for a real Democrat in 2016.” 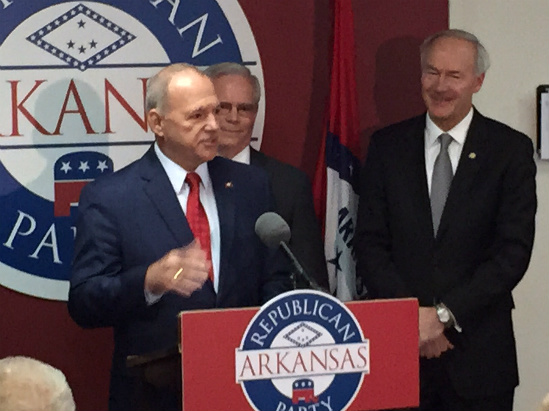