Arkansas voter approval in November of adult use (recreational) marijuana could add $2.4 billion to the state’s economy over five full years of implementation, and add up to 6,400 jobs by 2027, according to modeling from the Arkansas Economic Development Institute (AEDI).

The AEDI, housed at the University of Arkansas at Little Rock (UALR), was commissioned by Responsible Growth Arkansas (RGA) to conduct an economic modeling forecast of legal marijuana sales in Arkansas over a five-year period. RGA is the group that worked to get the proposed amendment on the November general election ballot.

According to the proposed amendment, adults could carry up to 1 ounce of cannabis and use and consume it. The law would limit the number of dispensaries and cultivation facilities to 120 and 12, respectively. Of the 120 dispensaries, 40 would be selected by lottery. Implementation would begin with the first legal sales of adult-use cannabis by March 7, 2023, with the additional dispensary and cultivator licenses to be issued by July 5 and November 8, respectively. Voters approved a constitutional amendment in 2016 that legalized medical marijuana. 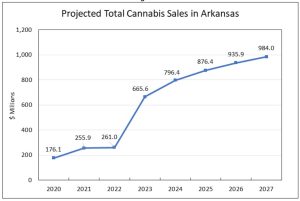 The modeling was adjusted based on data from the state’s medical marijuana industry. Modeling adjustments also included accounting records from a cultivator and dispensary that were provided by RGA. According to AEDI, focus areas include sales growth, state gross domestic product (GDP) , employment, income, and the fiscal impact of taxes generated.

Modeling also used real demand and sales data from states that have moved from medical use to adult use. According to AEDI, 37 states permit medical marijuana, and 19 have adopted laws allowing for adult use.

GDP, JOB GROWTH ESTIMATES
“The impacts implied by the full model are substantial. Looking at the measurable impacts, we see that total employment is predicted to increase by nearly 5,000 jobs in 2023, reaching as high as 6,400 by 2027. The contribution to GDP is estimated to rise from $370 million to nearly $543 million over the five-year period, with a cumulative total impact of nearly $2.4 billion,” noted the report posted Wednesday (Sept. 28).

Following is a summary of key findings from the AEDI modeling.
• The combined sales of medical and adult-use marijuana will more than double in the first year after adult-use implementation, with total sales increasing from approximately $665.6 million in 2023 to $984 million by 2027.
• There is an estimated increase in state GDP of $2.36 billion over the five-year study period.
• Increases in employment range from 4,900 jobs in 2023 to 6,400 jobs in 2027. 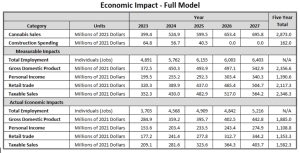 • Excluding economic activity “diverted from illicit markets” the GDP growth is revised down to $1.89 billion over the five years, with job growth of 5,200 by 2027.
• State sales tax receipts are estimated at $163.1 million, plus an additional $303.6 million from the proposed 10% supplemental sales tax on adult-use cannabis, representing an increase of $286.5 million in state sales tax revenue relative to the medical-only baseline scenario.
• Personal income tax collections would increase by $30.8 million relative to the baseline.
• County and municipal tax collections could total $92.6 million, representing an increase of $50.3 million over the baseline.
• Of the $303.6 million in state revenue generated by the supplemental sales tax, earmarked transfers over the five-year period include: The provision of $45.5 million for annual stipends to law enforcement officers; Funding for UAMS totaling $30.4 million; and Support for drug courts of $15.2 million
• The report also estimates $162 million in new construction spending, with $32 million for 80 new retail stores

TOURISM BOOST, PREVIOUS ESTIMATES
The Natural State might also have a new meaning, according to the AEDI report, which suggests tourism will be a big part of the overall economic impact.

“Much of the potential economic impact derives from purchases by out-of-state consumers, particularly new tourists who are attracted to vacation in Arkansas specifically because of the availability of adult-use cannabis. Discounting this source of demand to zero defines a low-impact scenario that provides a lower bound on our economic impact estimates. Even with this adjustment, economic and fiscal impacts remain significant, including a five-year increase in GDP of $1.66 billion and sales tax receipts that are $240 million above the baseline simulation,” noted the AEDI report.

Pakko and Silva also remind a report reader about how medical marijuana sales far surpassed initial estimates. According to a 2016 report from

The Department of Finance and Administration (DFA) estimated in 2016 that total annual sales could rise to $38 million a year but might take two years to reach that amount. The first full fiscal year (FY 2020) of medical marijuana sales topped $89 million, and sales topped $250 million in the second fiscal year.