For almost a century the castle on Albert Pike has been a constant in Fort Smith. Many have wondered what it is. Many know. In June, the former home of the Benedictine Sisters of St. Scholastica Monastery will tumble down, leaving only memories of the iconic building near Trinity Junior High.

“The decision to demolish the Former Monastery Building is not one that the Benedictine Sisters made lightly or without years of research and discernment. Since 2010, Saint Scholastica has engaged in communications with consultants, realtors, and friends of the community about feasible uses for the nearly 100-year-old building,” the news release said.

To repurpose the building into anything else would require significant investment with a great cost needed to bring it up to code and to adjust the layout for practical uses, the release said. A quote obtained several years ago estimated renovation to be more than $15 million, including all electrical and plumbing updates.

“After years of looking, no feasible uses for the Former Monastery Building panned out,” the news release said.

The former Monastery building was completed in 1924 after the Benedictine Sisters relocated from their original Arkansas home in New Blaine to what was then the outskirts of Fort Smith. At the time, the building was a school for day and boarding students for first through 12th grades in addition to being the monastic home when sisters came back to Fort Smith from their missions throughout Arkansas and adjoining states, the news release said. 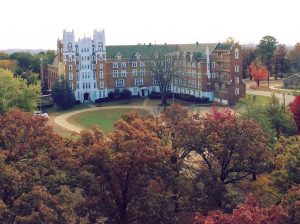 Beginning in 1936, grades one through eight were gradually dropped, until in 1944, it was a high school only, with grades nine through twelve. The building was used as a school until 1958 when a new St. Scholastica Academy was built north of the monastery building. That building is now Trinity Junior High.

St. Scholastica Monastery began in 1879 when two of the four Benedictine nuns from Immaculate Conception Convent in Ferdinand, Ind., who had come to Subiaco in September 1879 moved to Shoal Creek.

“The Cairo and Fulton Railroad Company had invited the monks and the Sisters to western Arkansas to serve German Catholic immigrants being encouraged to settle along the new railroad lines. As young women began to join the sisters in Shoal Creek, their four-room log cabin was gradually extended until by 1898, it was a quadrangular building built around a courtyard,” a history of Subiaco states.

By 1900, about 70 sisters were teaching in about 15 elementary schools in Arkansas, Missouri, Texas and Oklahoma. Continued expansion, a lack of water, poor roads and inaccessibility to health care led to the decision to move the hub to Fort Smith.

The first part of the old monastery building on Albert Pike was built in 1923-1924 in the late Gothic Revival style of architecture. F.W. Redlich from Oklahoma City was the architect of the five-story building. An addition was built on the north side of the original building in 1929, including a chapel, gym, swimming pool and chaplain’s quarters.

While today less than 30 sisters call St. Scholastica home, the number grew steadily from 1924. The number of sisters increased throughout the decades, peaking at about 300 in the 1970’s when their numbers began to decline.

By the early 2000’s, the community knew the five-story building was too large for the community, information from St. Scholastica said. In 2010, St. Scholastica contracted with the Realm Group to help the community make decisions concerning the use of their facilities and realized renovations to their building would not be feasible. The nuns began looking at partnering with a senior care business to build a continuing care facility on the grounds. Sisters needing skilled care would live in the nursing home part of the facility, and the rest of the sisters would live in the assisted living part, a timeline from the monastery said.

“This was the first time moving out of the Former Monastery Building was seriously considered,” it said.

St. Scholastica worked with St. Therese Senior Communities in Minnesota but the latter withdrew from the partnership. They later worked with Reliance, the owners of Chapel Ridge Health & Rehab, on plans for the owners to build a nursing home on the southeast part of the property to replace Chapel Ridge. In 2014, the sisters voted to sell nine acres to Reliance, but in October 2016, Michael Morton decided to renovate Chapel Ridge instead of building a new nursing home on St. Scholastica property.

In February of 2019, the Benedictine Sisters moved out of the old monastery building into a smaller, more energy-efficient building located south of their previous home.

“(There are) no restrictions on what a non-federal owner may do with their property up to and including destruction, unless the property is involved in a project that receives Federal assistance, usually funding or licensing/permitting,” the website states.

According to information from St. Scholastica, a committee is being formed to begin plans “regarding a use of the area that reflects the sisters’ desire to be good stewards of their land and their commitment to serve the greater Fort Smith community,” the news release said.