The Fort Smith Public Schools Board of Education has approved a new salary schedule for certified employees that will give teachers on average a 5.89% pay increase with the 2022-23 contract year. The 5-2 vote for the package came Monday night (May 9) at a special meeting.

VETERAN TEACHER RESPONSE
With the largest increases going to base salary for newer teachers, some veteran teachers feel the salary schedule change is ignoring those who have given a good portion of their lives to the students of the district.

“As a veteran teacher, I am very disappointed. We have not had a decent raise in 6 years and now this,” said Lorrie Tabor Woodward, a kindergarten teacher with FSPS. “It took 20 years for us to get in this position; the money could have been spread out more equitably, and the changes made over a few years. Other River Valley districts did it this way. It was a choice to ignore other options.”

“The (funding for salary increases) needs to be distributed better,” Aguilar told the board.

‘MARKET CORRECTION’
District administration presented the same CSS restructure to the school board April 18 with the exception of a step a 22. While the proposal would have done much to make beginning Fort Smith teacher salaries competitive with those in other schools in the Fort Smith region and closer to what is offered in Northwest Arkansas, the school board said they wanted at minimum another step added to the schedule, so more veteran teachers were included. 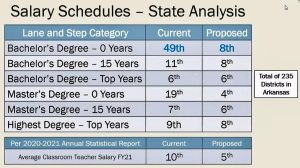 “At least we can tell all our educators that they will make more next year under the new salary schedule than if it had stayed the same,” Warren said.

The district’s personnel policy committee did not vote on the new schedule before Monday’s meeting because they had voted 16 in favor of and 13 opposed to the earlier proposal and the new schedule was an improvement on that, Superintendent Dr. Terry Morawski told the board. The board approved the new CSS by a vote of five in favor and two opposed with board members Troy Eckelhoff and Matt Blaylock voting against it.

PUSH FOR ADMIN JOB CUTS
Eckelhoff and Blaylock, as well as member Talicia Richardson, said the district needed to look at spending. Board member Dalton Person suggested the district bring in an expert to see where things could be streamlined and if some administrative positions could be eliminated or combined.

Chris Rink, a Fort Smith taxpayer who has three children attending FSPS schools, addressed the school board early in the meeting saying the district has waste in administration that continues to bloom. He said the district has at least 25 administrative positions who earn over $100,000 annually and 30 earning over $90,000 a year, which is more than districts of comparable size.

“In the past having an overly bloated district office wasn’t as important as it is today. Those district positions, while numerous and often overpaid, stayed in line with teacher salaries. The district seemed to show that the district staff were valued with percentage raises that coincided with similarly fair percentage increases for teachers. But you know times change,” Rink said. “I believe there are a significant number of positions that just are not necessary. Those positions account for $4.75 million approximately from just the directors and superintendents … and that doesn’t include their support staff.”

The average pay raise for teachers in the new schedule in percentage terms is still well below recent raises provided to District Superintendent Dr. Terry Morawski. When Morawski’s superintendent contract was recently extended, his salary was set at 14.47% higher than his salary approved Dec. 30, 2020. Certified staff pay has on average increased 1.11% during that same time.

Morawski has received two raises since his hire date, 5.6% with the start of this 2021-22 contract and 8.4% with his 2022-23 contract. In his contract, there was a stipulation that if he passed his performance review, his raise would be equal to Consumer Price Index for All Urban Consumers for the South as calculated by the U.S. Department of Labor for the 12-month period. This was the same stipulation that was in the contract for Morawski’s predecessor, Dr. Brubaker.

At the time of his last contract approval in March, Morawski asked that the raise rate available to him in the future be limited at 3%.