U.S. Marshals Museum President and CEO Patrick Weeks was arrested Monday (Dec. 21) by the Fort Smith Police Department on a charge of aggravated assault with a firearm. He was released Tuesday from the Sebastian County Adult Detention Center on a $3,000 bond.

According to a Fort Smith Police Department report, Weeks refused to allow two OG&E workers into his yard to work on street lights. The workers called the police when Weeks followed them with a pistol and pointed the pistol at them. When police arrived Weeks had re-entered his home.

“At that point myself, FTO (Field Training Officer) Jones, and OIT (Officer in Training) Kolb went to XXXX S. 28th St.,” arresting officer Joshua McLeod noted in the report. “FTO Jones went to the front door, and knocked. He heard a male yell at the dogs, and a white female came to the door. She told FTO Jones he could come inside. I followed. We located the homeowner sitting in chair with a pistol on the arm rest of the chair. The pistol had a grey slide. The homeowner was placed into custody without incident. FTO Jones secured the pistol.”

Doug Babb, chairman of the board of directors of the U.S. Marshals Museum, told Talk Business & Politics the museum would not comment on details of the arrest.

“The Marshals Museum and its board are aware of the investigation and the allegations regarding Patrick Weeks. We feel it is inappropriate to comment on an ongoing investigation. The fact that Patrick Weeks is under investigation will have no effect on our successfully fabricating the museum experience in the next year. And when the fabrication is completed we will announce our opening date,” Babb said Wednesday. 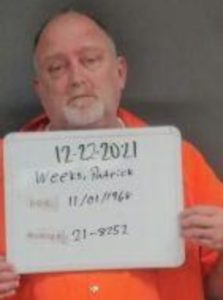 Museum officials announced in early November that the Fort Smith-based museum had received an influx of contributions following a $5 million matching gift announced over the summer, meaning production of the museum experience could start soon and the museum could open within a year. Construction of the approximately 53,000 square feet U.S. Marshals Museum was completed – except for exhibits – in early 2020. The facility is located on the Arkansas River near downtown Fort Smith.

In January 2007, the U.S. Marshals Service selected Fort Smith as the site for the national museum. A ceremonial groundbreaking was held in September 2015, and museum officials initially hoped to have the facility open by late 2017.

At the time of his hiring, Weeks was the principal of Strategic Experience Solutions in Dublin, Ohio, which focuses on project planning; implementation and oversight; growth and development of operations; annual budgets; and guest experiences. Prior to Strategic Experience Solutions, Weeks served as vice president of Roto, a design and production firm specializing in experiences for museums and entertainment venues. He also served as vice president of operations and guest experiences for the Arizona Science Center.