Gov. Asa Hutchinson on Wednesday (Oct. 13) discussed numerous faults with a Congressional redistricting bill and bills related to vaccine mandates sent to him by the Arkansas Legislature, but said he will allow them to become law without his signature.

Last week, the GOP-controlled legislature approved SB 739 which creates options for an employee to either show a negative test or prove immunity through an antibody test instead of taking a COVID-19 vaccine if an employer mandates it. The bill, noted Gov. Hutchinson, also a Republican, is designed to push back against mandates from the President Joe Biden administration and companies with more than 100 employees that will require their employees to get vaccinated.

Bill sponsor Sen. Kim Hammer, R-Benton, said the bill was about giving Arkansas employees a choice. But Gov. Hutchinson said the solution to Biden’s mandate is not to place additional mandates on employers at the state government level. He also noted that a provision in the bill allows employees to opt out of a vaccine if they have natural immunity, but there is no standard medical definition of natural immunity. He also said the bill creates a negative perception of vaccines.

“Substantively, beyond that, these bills are unnecessary and the debate on these bills have been harmful to our goal of increasing vaccination rates in Arkansas,” he said during his weekly press briefing Wednesday. He added later that “the debate and the bills themselves create distinct and additional hesitancy regarding the COVID-19 vaccines. These vaccines are safe and have been carefully tested and evaluated.”

The governor added that he did not veto the bill because there may be time to amend or block the bill before it becomes law.

“The extra 90 days before the bills go into effect allows critical time to assess the harm, and for the courts to review the bills as well if there is any challenge to those pieces of legislation,” he said.

He also said he’s pushed back against requests to issue an executive order similar to that from Texas Gov. Greg Abbott which essentially banned Texas-based companies from implementing a vaccine mandate. Gov. Hutchinson said such an order also puts employers in the “squeeze play” situation between federal and state government rules.

REDISTRICTING
Legislation creating new Congressional districts will not be vetoed primarily because of “deference” to the legislature, but it is problematic and likely to be challenged in court, Gov. Hutchinson said. 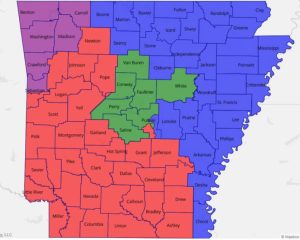 “Fair and equal representation is necessary for the integrity and the essence of our democratic process,” he said.

Grant Tennille, chairman of the Democratic Party of Arkansas, said he is aware of numerous parties considering legal challenges to the redistricting plan and predicted a challenge will be made. He also said the party is not leading the discussions, but will play whatever role is appropriate.

“I can tell you that it (legal challenge) will happen. There is common purpose among a large group of people who say the court has got to look at this,” Tennille said.