A nearly 13-foot tall bronze monument by Sallisaw artist Daniel Horsechief arrived at the U.S. Marshals Museum Friday (June 4), checking off one more box for the future museum that has struggled to raise enough funds to open.

The Five Civilized Tribes of Oklahoma Lighthorse monument is dedicated to the tribal law enforcement agencies that worked closely with the U.S. Marshals to capture fugitives during the frontier period. Though it will temporarily be stored in one of the museum’s galleries, the sculpture will have a permanent home on the southwest corner of the museum’s campus, where it will sit in the center of a large concrete star looking west toward Oklahoma.

The museum hopes to hold an unveiling ceremony for the sculpture when it is moved to its permanent location sometime in July, said Patrick Weeks, Marshals Museum president and CEO.

Horsechief is of Cherokee and Pawnee descent and has created many art pieces and sculptures over the years, including the bronze statue Sequoyah, one of the Cherokee Nation’s most noted citizens, at Northeastern State University in Tahlequah, Okla., said Catherine Gray, history and preservation officer for the Cherokee Nation. The Lighthorse was a native lawman with the police forces of the five tribes in the Oklahoma Territory during the frontier period.

“A lot gave their lives in the line of duty. Back then it was such a wild area that going out on their own, they weren’t guaranteed to come back,” Horsechief said.

In trying to honor those men, Horsechief said he tried to make the sculpture as “close to historical as plausible.” The lawman atop the horse, represents a man from the late 1860s to early 1870s.

“Since he represents five major groups, the five tribes, I kind of just generalized his features. I put some native features of those Southeastern groups that would tie in to all the groups, so it’s nonspecific,” Horsechief said.

He also used a lot of symbolism in the base of the sculpture. Because the subject is a light horse, Horsechief said he wanted the base to be “light.”

“It’s almost like he’s floating. I put him on a really stylized tree with a branch coming out and leaves floating. On the tree, I put all these symbols that represent water, rain, the earth, etc. Altogether, it represents the rough terrain he would be in,” he said.

Trees hold a special significance for members of the Southeastern tribes, Horsechief said.

“When our people were leaving, the older people were seen to be actually hugging the trees and crying because that’s where the spirits of the ancestors were said to reside. And that’s (the spirit of the trees) lifting him up, literally,” he said. 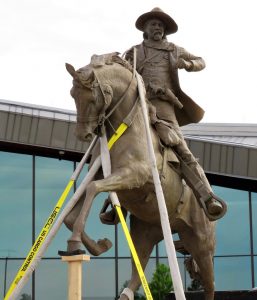 “It shows how much the success of the U.S. Marshals during those frontier days relied on the help of the lighthorsemen of the Five Tribes,” Weeks said.

The monument cost $180,000, and the monument infrastructure was $60,000. Both were funded by the Inter-Tribal Council of the Five Civilized Tribes. Though the delivery of the monument brings the museum a step closer to reaching its goals, there are still many steps before it is able to open to the public.

To date, the Museum – located near the Arkansas River in downtown Fort Smith – has raised nearly $38.8 million for the USMM building, campus, and Hall of Honor. There remains $12.5 million to raise to complete the museum. Of that $12.5 million, the Marshals Museum is focusing on $8 million, which will allow the experience inside the Museum (galleries, interactives and exhibits) to be built, said Alice Alt, president of the U.S. Marshals Museum Foundation. Earlier this year, the museum hired Bentz Whaley Flessner (BWF) as campaign consultants to help reach the fundraising goal, Alt said.

Organizers hope to hold a soft opening in summer 2022. Construction of the approximately 53,000 square feet U.S. Marshals Museum was completed – except for exhibits – in early 2020 with museum staff moving its offices to the new facility shortly after construction was completed.

The building can be rented for private functions, Weeks said, noting that there were two large weddings held there over Memorial Day weekend.