Editor’s note: This is the first of four stories in a series about the first year of the COVID-19 pandemic in Arkansas.

There were 64 deaths in Arkansas during the first 50 days of the known COVID-19 pandemic in the state (March 11 – May 1), which would be just under the one day record of 66 deaths on Dec. 29. Arkansas would average just under 15 deaths a day In the first year of the pandemic.

Arkansas’ Department of Health (ADH) reported 5,410 total deaths on March 11, 2021, the one-year anniversary of the pandemic in the state – a number that is more than the population of 478 of the state’s 540 cities.

Either based on wishful thinking, optimism and/or a desire to quell panic, state officials were initially confident about efforts to contain what had already been declared a global pandemic.

“We hope to mitigate the risks caused by the coronavirus,” Gov. Asa Hutchinson said March 11, 2020, during a press conference to discuss the first case being found in Pine Bluff. “We are as prepared as we can be for any upturn in an outbreak.”

That same week the ADH and Department of Human Services would issue a directive outlining procedures for health care officials to take extraordinary precautions to protect elderly residents in nursing homes and those with compromised immune systems in hospitals and other facilities. Gov. Hutchinson also began to restrict out-of-state travel for state employees.

“Business will continue as usual,” Gov. Hutchinson noted in that first press conference.

But the virus had other plans, and “usual” is something few believe may ever return.

The initial confidence would soon relent to a reality that would include the closing of schools, broad restrictions on businesses to include the closing of restaurants, bars and gyms, pausing of elective medical procedures, closing off state parks to out-of-state visitors, and strict capacity and social distancing rules for large venues such as concert arenas, theaters, churches and sporting events.

Gov. Hutchinson would begin to reopen the state economy in early May, schools would reopen in the fall with various hybrid virtual and in-person learning rules, fall school sports would return, and the state would devote more resources to testing, contact tracing and outreach to bilingual populations. 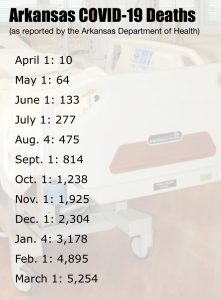 PANDEMIC POLITICS
Along with the rise in COVID cases and deaths would be a rise in the politicizing of the pandemic response, especially with the use of masks and public health emergency orders.

Then-President Donald Trump opposed mask mandates, refused to wear a mask, and would often mock public figures who wore masks. With an overwhelming majority of Arkansas voters supporting Trump, there was significant political pressure at all political levels in the state to oppose mask mandates. But after months of resisting calls for a mandate, Gov. Hutchinson on July 16 issued a statewide mask mandate, citing the rising number of cases and input from healthcare workers and legislators who said it was necessary to address the COVID spread.

“I have listened to doctors and nurses who are on the front line in this fight against COVID-19, and they ask the public to do more,” the governor said July 16. “I’ve heard from legislators that have a lot of different views. But many of them simply say, ‘I don’t like it, but whatever it takes, let’s get through this and give us the best chance for normal activities in the future.’”

Gov. Hutchinson was immediately criticized for the mandate, with some county sheriffs making it known they would not enforce it. A small group of legislators complained that Gov. Hutchinson and state health officials were acting outside of state law in enacting public health emergency orders. A lawsuit was filed in early September, spearheaded by then-Rep. Dan Sullivan, R-Jonesboro, alleging that 43 directives issued by the ADH should be invalidated because the executive branch overstepped its emergency powers authority and did not consult with the legislative branch. That lawsuit would eventually be dismissed.

ECONOMIC SUPPORT
Despite more than 150,000 Arkansas jobs lost because of COVID-19, expected broad slowdowns in the state’s economy didn’t materialize — especially in terms of consumer spending, measured primarily through tax revenue. The Arkansas Department of Finance and Administration (DFA) reported March 2, 2021, that gross revenue for fiscal year-to-date (July 2020 to February 2021) is $4.913 billion, up 8.4% compared with the same period in 2019-2020 and up 11.6% over the budget forecast. The report also showed a fiscal year-to-date revenue surplus – “net available revenue” collected beyond what was estimated – of $529.1 million. 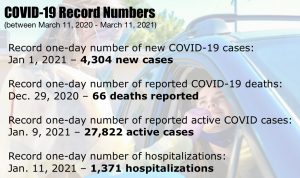 Much of the credit for keeping the consumer and a big part of the economy propped up was the $2.2 trillion Coronavirus Aid, Relief, and Economic Security (CARES) Act approved by Congress in March 2020 to provide aid to individuals, businesses and state and local governments in response to the pandemic. A $1,200 stimulus check to many Americans and extra unemployment benefits of up to $600 per week were critical parts of the CARES Act.

KEY COVID HEADLINES
Following are other notable moments in the past year.

March 14, 2020
The number of COVID-19 cases in Arkansas rose to 12, up from nine as of Friday. The three new cases are healthcare workers at Jefferson Regional Medical Center and related to the original case discovered in Pine Bluff. The Arkansas Department of Health web site would raise the number of confirmed cases to 16 on March 15. There are 30 people under investigation and 237 people being monitored in state.

April 6, 2020
With COVID-19 cases continuing to rise, schools will be closed for the remainder of the school year in Arkansas, with alternative methods of instruction (AMI) continuing. Gov. Hutchinson originally closed schools on March 15 for two weeks due to the outbreak of COVID-19 cases in Arkansas.

April 18, 2020
Gov. Hutchinson announced that Steuart Walton of Bentonville will chair a newly established Arkansas Economic Recovery Task Force. Walton is the grandson of Walmart founders Helen and Sam Walton, and a member of the Walmart board of directors. Gov. Hutchinson said the task force is charged to make recommendations on how best to return the state’s economy to normal and do so in a manner that creates confidence among state residents.

April 25, 2020
Gov. Hutchinson said traditional high school graduation ceremonies will not be allowed prior to July 1. Arkansas Department of Education officials also are reviewing options in the event it is not safe to fully open schools in the fall.

May 5, 2020
Gov. Hutchinson extended a statewide COVID-19 emergency declaration for another 45 days, while warning that a new wave of prison cases was likely to come from a federal unit in Forrest City and possibly a state prison in southeast Arkansas.

May 18, 2020
The number of known COVID-19 deaths in Arkansas reached 100 May 18, with hospitalizations rising from 65 on Sunday to 77 on Monday. Also on Monday, Gov. Hutchinson said bars within restaurants may open May 19, and freestanding bars may open May 26.

June 10, 2020
Arkansas businesses may move into a phase two reopening of the state economy on June 15, Gov. Hutchinson said. However, he warned that Arkansans must remain focused on prevention measures because “we are still in the heart of the woods … when it comes to this healthcare emergency.”

Aug. 24, 2020
The return to school, blood plasma treatments and the need for more testing were key parts of Gov. Hutchinson’s Aug. 24 COVID-19 briefing, with Arkansas Secretary of Education Johnny Key saying Arkansans must follow safety guidelines “if we want to make this work.” Hundreds of thousands of students, educators, support staff and others returned Monday to in-class instruction at Arkansas public schools. Thousands of students elected to return to school only with virtual instruction.

Sept. 22, 2020
More testing, more flu shots and improved contact tracing are part of Gov. Hutchinson’s “winter strategy” to battle COVID-19, and how he hopes to reverse a trend that has the state at fourth in the nation for new cases per 100,000 population. A White House report on the states posted Sept. 20 shows that Arkansas continues to struggle with efforts to contain COVID-19.

Nov. 3, 2020
The continued rise in COVID-19 cases and hospitalizations has some hospitals “stretched thin,” with a shortage of healthcare workers more of a concern than hospital bed availability, according to Bo Ryall, president and CEO of the Arkansas Hospital Association. Ryall said hospital systems in northeast and central Arkansas are especially “tight.”

“What we are seeing is a shortage of healthcare workers. That is caused by fatigue, competition from other states, increasing costs and community exposure,” he said.

Dec. 14, 2020
Dec. 14 was referred to by many as the beginning of the end of the COVID-19 pandemic, with a New York City nurse receiving the first COVID vaccine in the United States. In Arkansas, the first vaccine was given to Sherian Kwanisai at the Arkansas Department of Health (ADH) in Little Rock. Kwanisai is nursing director of the Center for Local Public Health within the ADH.

Dec. 22, 2020
With hospitalizations reaching a new record of 1,103 in the Dec. 22 Arkansas Department of Health report, Gov. Asa Hutchinson said 124 more hospital beds will be added in Little Rock and Van Buren through a partnership with Little Rock-based Baptist Health.

March 11, 2021
Gov. Hutchinson said he and First Lady Susan Hutchinson will plant an oak seedling on the Arkansas Governor’s Mansion grounds to recognize “lives lost during this pandemic, and a hope for the future that we all have.” The Arkansas Health Department (ADH) reported 340 new known confirmed and probable COVID cases, bringing the cumulative total to 326,040. The daily case count is well below the record of 4,304 on Jan. 1. Confirmed and active probable cases totaled 3,144, down 83 from the previous day. The active case count is also well below the record of 27,822 on Jan. 9.