With COVID-19 cases and deaths continuing to rise, Gov. Asa Hutchinson on Wednesday (Oct. 14) announced a plan to use an initial allotment of 100,000 rapid test kits and the 50,000 expected each week from the federal government.

Arkansas has received 100,000 Abbott BinaxNOW rapid antigen tests and 50,000 more are expected each week until the state receives its planned allotment of 900,000. That is in addition to the BD Veritor rapid antigen test machines now available at Arkansas Department of Health offices around the state.

Following are the priorities for where the Abbott tests will be placed and how they will be used.
• K-12 schools – 55% of the tests
Used for weekly screening of staff. Symptomatic staff will continue to have priority for rapid testing at ADH local office
• Staff of Department of Corrections – 20%
Visitors and residents whose jobs require them to interact with the public
• DHS Human Development Centers – 20%
Staff at Arkadelphia, Booneville, Conway, Jonesboro and Southeast
• Health care workers 5%
Tests held in reserve for health care workers and other populations as needed

Gov. Hutchinson said poll workers will also be given testing priority through the local ADH offices. Arkansas Secretary of Education Johnny Key said the tests will be prioritized for schools in red zones, schools with a history of modifications, schools with an ongoing high case number and other signs pointing to a developing hot spot. He said the Arkansas Department of Education will have priority districts identified on Oct. 19.

Arkansas Secretary of Health Dr. Jose Romero said the tests are “extremely easy to use” and give officials a way to more quickly isolate those with COVID and begin contact tracing.

“This is a new world for us that will give us new benefits,” Gov. Hutchinson said in a statement. “This testing will give us a quick response on positive tests, but also offer quick assurance for negative results. We will utilize it in schools, health care settings, human development centers, and with Department of Corrections staff. Health care workers will always have priority. This is the first time we’ve developed a plan for broader surveillance testing. These tests will help us identify new cases in ways we haven’t before. You get results within 15 minutes. The tests give us more flexibility.”

BED CAPACITY, HEALTHCARE WORKERS
When asked by the media about the rising number of cases and recent rises in hospitalizations and ventilator use, Gov. Hutchinson said he and ADH officials are in contact with hospital systems around the state and they are not stressed.

“They all tell me that they’ve got flexibility, they can handle the cases and we’re not to the point of having full capacity,” Gov. Hutchinson said, adding that they watch the situation and can move to the “surge capacity” plan developed earlier in the year.

“That is the challenge because ICU beds take extra personnel, highly qualified teams. They have those in place but having the adequate personnel is a challenge for the future and that is something we will work on and try to address as needed,” he said.

He also said any money from another federal stimulus package could be directed to help keep healthcare workers in Arkansas. 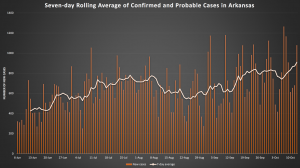