Gov. Asa Hutchinson on Friday (Aug. 7) pushed back against criticism of school opening and fall sports decisions, and sought to clarify guidance on positivity rates – 5% or 10% – as they relate to sending students back to school.

The governor and Arkansas Secretary of Education Johnny Key also announced Friday an effort to seek $20 million from the state’s CARES Act Steering Committee to provide up to two weeks of compensation for teachers and “classified” support staff who have to quarantine because of COVID-19. The money would come from the Coronavirus Aid, Relief, and Economic Security (CARES) Act approved by Congress to provide aid to individuals, businesses and state and local governments in response to the pandemic.

“We know that there is going to be a positive case in the school. We know that because of that, we might have to have a staff person that has to quarantine, or a teacher that has to quarantine, even though they are not positive they still need to do that. And so we don’t want that to come out of their ordinary leave or their pocket. We estimate that the best guess through the end of the year about $20 million,” the governor said about the funding request.

‘WHAT FOOLS WE WERE’
Jonesboro Public Schools Superintendent Kim Wilbanks said Aug. 6 during a Zoom meeting with the Jonesboro Kiwanis Club that decisions to open schools and play football were based on economic reasons.

“So, for the first time in the history of my educational career, our educational organizations are not able to independently make decisions,” Wilbanks said in a report from the Jonesboro Sun. “The governor’s office is trumping the Department of Elementary and Secondary Education.”

Wilbanks, recipient of the Milken Educator Award and 2014 Arkansas Superintendent of the Year, also said: “I’m sure two years from now, we’re going to look back and say, ‘what fools we were.’”

Gov. Hutchinson said Friday during his daily COVID-19 briefing he was aware of Wilbanks’ comments.

Wilbanks is not the only high-profile educator in recent days to criticize Gov. Hutchinson’s mandate that all schools include in-class instruction in their opening plans. Stacey James McAdoo, the 2019 Arkansas Teacher of the Year who now teaches future educators in the Excel program and is the lead Secondary Novice Teacher Mentor for the Little Rock School District, accused the governor of making economic decisions rather than considering the health of students, teachers and others.

“Let us know the acceptable number of school related COVID sickness and death you are okay with,” McAdoo noted in this Facebook post that was an open letter to the governor. “Be transparent with the public about the true extent of practical and logistical guidance provided to the districts related to reopening the schools from March 2020 until now. Paint an accurate picture for the parents about what education in most public schools and classrooms will truly look like (especially for those in older buildings and more impoverished communities) as educators try to restrict movement and stop the sharing of contaminated air in poorly ventilated spaces for roughly seven hours straight. Tell them that economics (and the money generated from sports and standardized testing) are more (than) important people.”

(Talk Business & Politics has asked the governor’s office for response to McAdoo’s letter. We will update this story when/if a response is received.)

POSITIVITY RATE COMMENTS
With the state’s COVID positivity rate continuing to remain above 10%, Gov. Hutchinson acknowledged that the trend “is not good news,” and “is a little bit above 10%. That’s what we want to have come down. We’ll continue to watch that. That’s very important.” 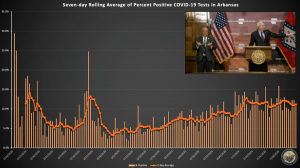 When asked about factors included in decisions to open school or to close school to in-class instruction, Gov. Hutchinson said the positivity rate is a consideration, along with where the school district is and if the area positivity rate is pushed higher by a nearby nursing home or prison, the total number of cases, and how many tests are conducted.

Gov. Hutchinson was also prepared to clarify comments from CDC Director Dr. Robert Redfield related to the “preferred” positivity rate and decisions to open schools. Using documents he brought to the briefing, Gov. Hutchinson said Redfield’s comments were “guidance” about a 5% positivity rate being needed in to hot spots. He said the CDC also targets as acceptable a 10% rate, “as I’ve always indicated, sort of the standard that you are trying to achieve. Now, I’m not happy with the fact that we’ve edged up a little bit more than 10%, but as Dr. Redfield points out, there are a lot of factors to consider in that. One of them being exactly, in some of the counties, those are positivity rates that come from congregant facilities.” 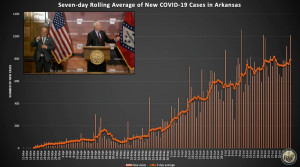 In his July 24 daily briefing, Gov. Hutchinson indicated he believed a 5% positivity rate was encouraged by the CDC and a rate the state needed to reach before schools begin to open on Aug. 24.

“I did notice that the CDC guidelines came out, and I haven’t studied them thoroughly yet, but they indicate that they look at the positivity rate and that we’d like to see it closer to 5% positivity rate as we reopen schools. And so we’ve got a lot of work to do over the next 30 days,” the governor said July 24.