On Wednesday (Aug. 19), Gov. Asa Hutchinson, Attorney General Leslie Rutledge, a swath of bipartisan legislators, and representatives of the business and religious community announced their support for a hate crimes bill to be proposed in the 2021 legislative session.

The bill has four senators and 18 representatives as co-sponsors, but other legislative leaders attended the state capitol press conference to voice support for the bill.

Hutchinson said the “time was right” for the bill to be debated in light of events of the last year, such as the George Floyd killing and several transgender murders that have occurred in Arkansas.

“Arkansas needs to join the vast majority of states who have passed similar legislation. We need to say clearly that Arkansas will not tolerate violence against anyone because of their race, their religion, or because of who they are,” Gov. Hutchinson said. “We are at a point in our history that we must hold to a higher degree of accountability those who target individuals because of where they were born, how they worship, or how they choose to live.”

The legislation also requires the collection of data related to hate crimes. The Attorney General’s office will establish and maintain a central repository for the information. State and local law enforcement will submit the data to the AG on a quarterly basis and summary report will be mandated for publication December 1 every year. 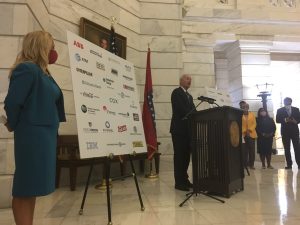 Arkansas is one of three states – the other two being South Carolina and Wyoming – that does not have a hate crimes law on its books.

“It is past time that Arkansas joins the rest of the country and takes an unequivocal stance against hate crimes,” said AG Rutledge, who has announced her candidacy for Arkansas Governor in 2022. “I applaud the members of the General Assembly for taking action on this issue and I will work with any legislator to pass a law that ensures we will not tolerate hate in The Natural State.”

Faith leaders, some of whom have opposed the legislation in past attempts due to the sexual orientation clause in previous bills, showed up visibly in support on Wednesday. Also, representatives of the state’s business community endorsed changing the law. More than three dozen companies were represented on placards at the press conference.

Randy Zook, CEO of the Arkansas State Chamber of Commerce and Associated Industries of Arkansas, said it was the right thing to do, but would also be an asset to recruiting a talented workforce to the state.

“We simply cannot afford to turn people away because they look, act or live differently,” he said. “It makes good business sense and it makes practical sense [to pass this law].”

After the press conference, Jerry Cox, executive director of the Family Council, a conservative group that frequently weighs in on social and religious issues, put forth a statement opposing the measure.

“This law allows the punishment of thoughts and beliefs. No one should be punished for what they think,” he said. “Hate-crimes laws do not work. There is no evidence that these laws in other states have ever prevented a crime. This law can have bad consequences, because it allows activist judges to use this law as a weapon to punish thoughts, free speech, and other freedoms. We all wish hatred could be stopped by just passing a law against it, but this simply isn’t possible. Unfortunately, this law creates more inequality by favoring special categories of people based on their sexual orientation, gender identity, and other characteristics.”