Do you want football in the fall? Wear a mask. Do you want to avoid a growing number of known long-term health problems resulting from COVID-19? Wear a mask. Such were the lectures Wednesday (July 1) from Gov. Asa Hutchinson and Arkansas Secretary of Health Dr. Nate Smith.

Gov. Hutchinson noted that “for the first time in a long time” the number of known active COVID-19 cases fell (from 5,976 on Tuesday to 5,757 on Wednesday) but the effort continues to encourage people to follow health safety guidelines. He held up a football and a mask, noting that if Arkansans want a football season they need to wear masks and practice social distancing. Even when noting Wednesday’s improved numbers, the governor said the struggle remains: “How do you fight complacency every day?”

“Hopefully Arkansans are getting the message that consistency is what we need in disciplined behavior in social distancing and in wearing masks as a part of that,” he said.

To avoid rising numbers from July 4th holiday activities, Gov. Hutchinson said he has asked state park leaders to be vigilant in ensuring social distancing and wearing masks. He also asked the Arkansas Alcoholic Beverage Control to “be active” and make sure owners of liquor licenses are “mindful of their responsibility and just don’t let the parties and the celebration get out of control.”

Smith said Arkansans also need to know COVID is not just a virus that impacts the lungs. He said the virus also results in “severe non-respiratory complications” such as heart disease, blood clots, strokes and other neurologic complications. He said strokes – especially those that are fatal – are “being recognized as a greater and greater problem, and it can affect people of all ages.”

He also cited an e-mail from a physician who recovered from COVID but associated heart inflammation caused by the virus resulted in congestive heart failure that now threatens his life. 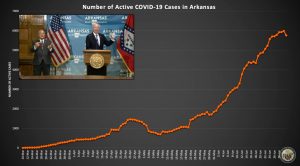 “He wanted to make sure that I got that message out that everyone needs to be wearing masks to prevent this,” Smith said. “Because this was an otherwise healthy, strong individual who now has an uncertain health future because of COVID-19. I don’t want to be a downer today on a day when we have lots of good news in terms of trends, but I wanted to make that clear that the reason why we are talking about masks and preventing this is because this is a serious condition that can change lives as well as end lives.”

COVID CASES, HOSPITAL AND VENTILATOR NUMBERS
Known COVID-19 cases in Arkansas totaled 21,197 on Wednesday, up from 20,777 on Tuesday. Of the 420 new cases, 33 were from correctional facilities. There are 5,757 active cases. The number of deaths rose from 270 to 277. The number of COVID patients hospitalized in Arkansas was 275 on Wednesday, down from 290 on Tuesday. There are 72 patients on ventilators, up from 67 on Tuesday. Of the known cases since March 11, 15,163 have recovered.

The number from correctional facilities is likely to rise, because 69 cases from Lee County are likely from inmates and staff at the East Arkansas Regional Unit (Brickey’s) but have not yet been classified.

Apart from Lee County, the top counties for new cases reported Wednesday were Pulaski (49), Washington (48), Yell (28), and Benton (20). No other Arkansas county had 20 more new cases.

GUARD TRAINING CANCELED
Gov. Hutchinson also announced Wednesday during his daily COVID briefing the canceling of a significant training exercise at Fort Chaffee near Fort Smith by members of the 39th Infantry Brigade.

The approximate 3,860 members of the unit, coming from multiple states, were set to gather this weekend at the Fort Chaffee Maneuver Training Center. However, Arkansas Adjutant Gen. Kendall Penn said they discovered in recent days that federal rules did not allow for the funding to test each Guard member before they returned home after the two-week training.

Penn said federal policy and statute “have not kept up with the reality” of COVID and only allows for testing of those with symptoms.

“That keeps us from being able to mitigate the potential risk of folks who are not symptomatic going home with a disease,” Penn said.

He said brigade leaders are working on ways they can conduct some of the training at their home locations.

According to the Army National Guard, the 39th is the largest major command in the state and is headquartered at Camp Robinson in North Little Rock. The brigade has units in 37 communities in Arkansas, Missouri and Nebraska.

“The 39th is primarily an infantry brigade organized to provide wartime missions in maneuver, field artillery, reconnaissance, intelligence, engineering and medical operations as well as maintenance, signal support and transportation activities,” according to the ANG.