Gov. Asa Hutchinson on Friday (July 10) again noted his concern about shortages in the national COVID-19 testing materials supply chain, and he also said people have to be “hiding under a rock” to not yet understand how wearing a face mask can slow the spread of the virus.

During his daily COVID-19 briefing held Friday from DeQueen, which has been the hardest hit rural area in the state thanks to poultry plant-related COVID-19 outbreaks, Hutchinson said the average time from sample collection to test result was 3.2 days in March, fell to 1.7 days in May, but is up to 2.5 days in July. He said the “wait time will probably go up from that as well” because a national testing supply shortage has created a “pressure point on the six commercial labs” which delays their ability to return timely test results.

“That’s something that concerns us because we need quick results that helps us to manage the outbreak, to control it, to isolate people that need to be isolated. So we want to watch that and hopefully, with national support, we can get more resources in our commercial labs so we can get a quicker response time that will help us in states like Arkansas,” Gov. Hutchinson said.

The governor said he continues to lobby the White House to enact the Defense Production Act to provide more testing supply resources.

Of the 602 new community cases, 49.3% were from six counties: Pulaski County (100), Benton County (54), Washington County (51), Sebastian County (42), and Faulkner and Pope counties each had 25. Hot Spring County had 145 new cases reported, but Arkansas Secretary of Health Dr. Nate Smith said “most, if not all” were from the Ouachita River Unit of the Arkansas Department of Corrections in Malvern. 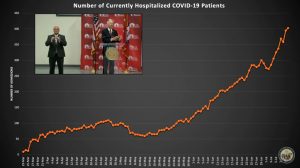 In response to a media question about those who believe masks are not effective or the wearing of a mask is some part of a conspiracy, Gov. Hutchinson said “those that follow the conspiracy theory are in the extreme minority.” He also said state and national messaging has been consistent about the benefits of wearing masks and taking other public health safety precautions.

“You’d have to be hiding under a rock somewhere really not to get the message that has been conveyed consistently as to how you protect others. But it’s also common sense as you can see that [wearing a mask] protects you and others from the spread of the virus,” he said.

Also on Friday, the Federal Transit Administration awarded $42.7 million to the Arkansas Department of Transportation for state and project administration, including leave for employees due to the reductions in service or the need to quarantine; operating expenses to maintain transit services; and the purchase of personal protective equipment and cleaning supplies.

The money comes from the Coronavirus Aid, Relief, and Economic Security (CARES) Act, which became law in March and was designed to help individuals, businesses and governments respond to the pandemic.

Previous post
Back-to-school spending estimated at $28.1 billion for K-12
Next post
Walmart plans for up to 50% capacity at Bentonville headquarters Aug. 17