With COVID-19 cases continuing to rise and the number of hospitalizations reaching new records, Gov. Asa Hutchinson said Monday (July 6) the state plans to invest $40 million to add contact tracers in an effort to contain the pandemic.

Part of that effort also includes more testing, with the governor setting a testing goal of 200,000 in July. The state tested more than 180,000 in June. He said reaching the goal will depend largely on demand and on the state having an adequate supply of testing materials. Gov. Hutchinson said he spoke with White House Coronavirus Task Force members to again encourage President Donald Trump to use the Defense Production Act to address the national testing supply chain problem.

The number of hospitalizations jumped significantly over the weekend, with Monday setting a record of 337, up 52 from Friday. Of the 982 ICU beds in the state, 185 remained available, according to the Arkansas Department of Health (ADH).

“While it’s tight, we have not reached capacity,” Gov. Hutchinson said of the rise in hospitalizations.

Arkansas Secretary of Health Dr. Nate Smith said he is concerned about the recent rise in central Arkansas cases, saying officials must work to avoid an outbreak like that seen in Northwest Arkansas in June. And unlike cases in Northwest Arkansas where the outbreak could be traced to poultry plants and household clusters, Smith said in central Arkansas there is no single source, with the case rise “pretty widespread in the central region.”

CONTACT TRACING
The state has entered into a one-year, $20 million contract with General Dynamics Information Technology to employ 350 contact tracers. Gov. Hutchinson said some contact tracing from the contract could begin as early as this week. He said funding approval is being sought for another $20 million, third-party contract to add another 350 tracers by the fall.

Money for both contracts come from federal funds the state received through the Coronavirus Aid, Relief, and Economic Security (CARES) Act approved by Congress to provide aid to individuals, businesses and state and local governments in response to the pandemic.

Gov. Hutchinson also said the ADH has around 320 in-house contact tracers, meaning the state will have almost 1,000 contact tracers working by the fall.

“This is a huge increase in our investment … as well as our capacity. It doesn’t mean it’s going to be perfect in the fall. We’ll continue to monitor that, but those are big investments that we are making,” he said.

Following are the job duties of contact tracers, according to the General Dynamics hiring page.
• Call all contacts of patients diagnosed with COVID-19, and following set scripts, gather details about each contact of an exposed individual, determine exposure, assess symptoms, refer for testing according to established protocols, and provide instructions for isolation or quarantine. 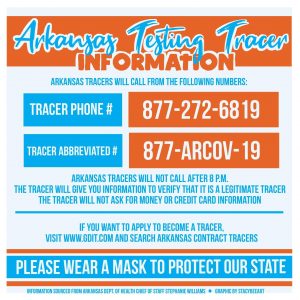 The page also notes that those hired will work from home and have a flexible schedule that “may require shift work, on call status.”