Gov. Asa Hutchinson said Monday (June 22) the state is “not backing off testing,” and said President Donald Trump’s “flippant” comment about slowing down COVID-19 testing does not reflect the national policy of test expansion.

President Trump said Saturday during his campaign rally in Tulsa that he encouraged “my people, to slow the testing down please.” When asked about Trump’s comment, Gov. Hutchinson said the statement – even if joking – has no bearing on the pace of testing in Arkansas. As of June 21, the state had conducted a combined 120,053 tests, surpassing the June goal of 120,000 tests.

“I thought it was somewhat of a flippant comment, but everybody needs to understand how seriously we take this and how we are going to continue to expand testing,” the governor said during his daily COVID-19 briefing.

“It’s clear that the national policy is to expand testing. And there again, you have to look at what is the action, what is the true policy, versus just what the words are,” Gov. Hutchinson said. 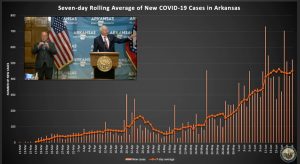 HOSPITAL CAPACITY
Most of Monday’s daily briefing focused on the state’s capacity and availability of hospital beds and ventilators. According to Arkansas Department of Health (ADH) figures, there are 8,917 hospital beds in the state, with 2,552 beds available, and 970 ICU beds with 222 available. ADH figures also show the state’s medical facilities have 894 ventilators with 583 available.

CEO’s of three central Arkansas hospitals – Chad Aduddell, CEO of CHI St. Vincent; University of Arkansas for Medical Sciences (UAMS) Chancellor Dr. Cam Patterson; and Baptist Health CEO Troy Wells – spoke about their ability to respond to changing needs, and how they work within their systems and with each other to move patients and resources if necessary.

Wells said even among hospitals that compete for services, they “don’t have a problem picking up the phone and working with one another” during the pandemic. He said Baptist Health, like other hospital systems, also has internal flexibility to shift resources to rural areas if needed.

“In addition to being used to moving patients throughout the health system and across different hospitals around the state, we’re also really adept at flexing our services as needed. So we know when we can turn some of these things on and turn some of these things off, that creates capacity from a clinician standpoint and from a bed standpoint. So my main message to you today is that hospitals are in good shape around the state,” Wells said.

Patterson said there are areas of the state – such as Northwest Arkansas – approaching being “capacity constrained,” but UAMS is working with them to transfer patients if necessary. Gov. Hutchinson said he has been in contact with Northwest Arkansas hospital operators and they have the capacity to respond to the growing number of cases and have enough personal protective equipment (PPE). As of Monday, Benton and Washington counties account for 29% of all known COVID-19 cases since March 11 and 34.6% of active cases in the state.