The governor stressed Friday during his daily COVID-19 briefing there is no correlation between the limited opening of the Arkansas economy and the rise in cases. He said contact tracing data shows 2% of new cases come from restaurants, 2% from churches and 2% from elective doctor/dentist visits.

RECORD HIGH, ABC SUPPORT
Known COVID-19 cases in Arkansas totaled 18,740 on Friday, up from 18,062 on Thursday. Of the 678 new cases, nine were from correctional facilities. The 669 new community cases marked a new daily record. There are 5,707 active cases. The number of deaths rose from 242 to 249. The number of COVID patients hospitalized in Arkansas was 284 on Friday, unchanged from Thursday. There are 63 patients on ventilators, down from 66 on Thursday. Of the known cases since March 11, 12,784 have recovered. 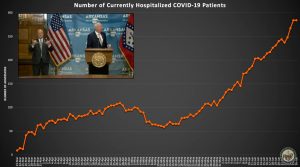 “If the data showed that we’re having outbreaks as a result of bars not following guidelines and resulting in positive cases that demonstrate a problem, then certainly we would take action, but that has not been the case,’ he said.

‘ASLEEP UNDER A LOG’
When asked about business owners having to be the “bad guy” when it comes to enforcing mask use and social distancing, the governor said customers should know better but business owners do have the obligation to enforce rules in their businesses.

“You’d have to be asleep under a log somewhere not to know that wearing a mask protects others and protects yourself. … Well, if they come in and they’re not willing to comply with the directives, that’s the responsibility of the business owner to make sure that there is compliance or that customer is asked to leave,” Gov. Hutchinson said.

Gov. Hutchinson also said a directive issued Thursday by Little Rock Mayor Frank Scott Jr. requiring the wearing of masks is “supportive of the state directives.” The Little Rock ordinance requires everyone to wear face coverings in public places except when it’s possible to maintain six feet of physical distance from others. Masks are encouraged, but not required, in private businesses like grocery stores, convenience stores, supermarkets and laundromats. Children 12 years old and younger are exempt from the ordinance, as are those driving a car or with health-related issues.

The governor, who had opposed a similar effort in Fayetteville, but said Mayor Scott’s directive includes language that falls under state rules.

“In essence, this proclamation is an encouragement for people to wear a mask,” he said.