Gov. Hutchinson, in response to a media question, said he was not expecting the ongoing rise in new COVID-19 cases.

“But it just illustrates the fact that it is unpredictable. We haven’t seen anything like this virus, and in fact, many thought the second wave would actually be this fall,” he said. “In Arkansas, the quickness of the second peak was a surprise and the fact that we don’t know where it is going to go from here is something that is still a little bit unpredictable.”

A Wednesday announcement is not soon enough for Rep. Dan Sullivan, R-Jonesboro. Sullivan sent a letter to Gov. Hutchinson saying he has talked to business owners in Northeast Arkansas and they are weary of the phase one restrictions and are ready to move to phase two.

Phase two would allow fewer restrictions for business openings. For example, restaurants – the most impacted by COVID-19 rules – could expand from 33% to 66% of building capacity in the second phase of reopening. Phase two is an option for “states and regions with no evidence of a rebound and that satisfy the gating criteria for a second time,” according to White House guidelines. 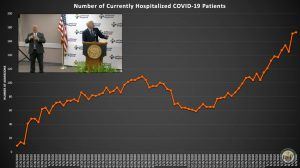 In his letter, Sullivan said many in his area believe Gov. Hutchinson’s directives are “confusing, inconsistent, impractical, arbitrary, randomly enforced, unfairly target select industries, and cause fear and frustration for consumers and business alike.” He said they are set to open with or without state approval.

“Please be advised that many in our region intend to move safely to Phase 2 of Arkansas’ Open For Business model on Friday, June 12th,” concluded Sullivan’s letter to the governor.

When asked by the media about Sullivan’s letter and what might happen if businesses open with phase two rules before they are approved, Gov. Hutchinson said some businesses could lose their ability to operate.

“Many of the businesses are licensed, whether it is a restaurant or whether it is a different type of facility. If they have a license and you don’t follow the public health guidance then that could jeopardize your license,” he said.

Jonesboro Mayor Harold Perrin told Talk Business & Politics the authority to move toward phase two is with the governor. Businesses should continue to operate under existing guidelines until a new directive is issued.

“The authority lies with the governor, who depends on the state health department for guidance and enforcement,” Perrin said.

It’s not the first time Gov. Hutchinson’s directives have been challenged. He and Arkansas Secretary of Health Dr. Nate Smith in early May were confronted with the scheduling of a May 15 concert at TempleLive in Fort Smith. The Travis McCready concert was three days prior to the May 18 reopening date for large venues set by Gov. Hutchinson. Smith sent a 4-page cease and desist order suggesting TempleLive owner Lance Beaty and others could face “administrative penalties, a civil or criminal fine or imprisonment if convicted, or all of the above.”

A few hours prior to a 1 p.m., May 14 press conference announced by Beaty, officials with the Alcoholic Beverage Control arrived at TempleLive to seek “summary suspension” of Beaty’s liquor license. The printed order from ABC noted “that emergency action is required. The business is not operating in the public interest and poses a danger to the public’s health, safety, and welfare.” Beaty eventually deferred and rescheduled the concert for May 18.