Part of Tuesday’s (May 26) daily COVID-19 briefing included Gov. Asa Hutchinson and Arkansas Secretary of Health Dr. Nate Smith lecturing Arkansans on the need to be “disciplined” in following social distancing and other guidelines.

The often blunt encouragement follows an 8-day rise in new COVID-19 cases that account for 23% of known cases since March 11, and several reports of Memorial Day weekend parties in which it was clear state directives on social distancing were ignored.

Tuesday’s report from Smith included news that 301 of the known cases are tied to poultry processing plant workers. Of those, 69 are in Benton County, 54 in Yell County and 44 in Washington County. Of the 150 community cases reported Tuesday, 42% were Hispanic, Smith said, with part of the increase tied to more testing of the Latino community. Also, according to Gov. Hutchinson, there was a case tied to a van that takes workers to poultry plants.

‘EQUAL OPPORTUNITY VIRUS’
Smith said COVID-19 is an “equal opportunity virus” that requires everyone, no matter their age, health or other demographics, to follow state directives and other protocols in the effort to contain the spread. He also posited a question he sometimes hears. 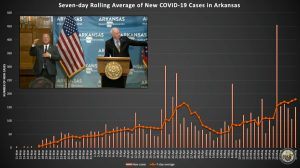 “Why are we worried about a disease in which 99% recover? Well, 99% may recover, but that leaves 1% who don’t. And an example of that was one of our recent deaths, is a woman who was infected at a Mother’s Day gathering. That’s tragic. That’s not what anyone wanted when they gathered for that,” Smith said. “So we need to think about what we’re doing and how it may impact the people that we care about. 1% of the population, if applied to the entire population of Arkansas, that’s 30,000 deaths. That’s not acceptable. We need to take action.”

Gov. Hutchinson also addressed the reports of non-social distancing and no masks worn at large Memorial Day parties. He said the “national media focuses on one or two instances in which things look bad,” but a “vast majority” of Arkansans are “really paying attention to follow the guidelines.” However, he noted, people should know the economy will remain restricted if the number of COVID-19 cases continues to rise.

“The direction that we go from here totally depends upon the discipline and the commitment of the people of Arkansas to avoid circumstances in which they will contribute to the spread,” he said. “So I challenge all Arkansans to think this through and realize that we are trying to open up our economy, to lift restrictions, the restrictions that were in phase one. But we want to get to phase two, and we can’t get to phase two whenever we see a continued upward trajectory.”

The governor also showed modeling from the University of Arkansas for Medical Sciences predicting the number of COVID-19 cases in Arkansas could rise to 8,500 by June.

“I want to challenge Arkansans that we don’t have to go there,” Gov. Hutchinson said about the modeling.

SMITH DEPARTURE
Gov. Hutchinson also announced that Smith will leave his Secretary of Health post on Aug. 28 for the job as deputy director for Public Health Service and Implementation Science with the U.S. Centers for Disease Control and Prevention (CDC) in Atlanta. Smith has been the state’s health director since 2013. Staying on through August allows the state “significant amount of time for a transition,” the governor said.

“Once again, we have a national star that will come in to help give us guidance in the future,” Gov. Hutchinson said.