Steuart Walton, chairman of Gov. Asa Hutchinson’s Economic Recovery Task Force, on Thursday (May 28) previewed the group’s first report that will be made public Friday. A special legislative session to consider employer liability protection is one of the report’s recommendations.

Gov. Hutchinson said in announcing its creation the task force is charged to make recommendations on how best to return the state’s economy to normal and do so in a manner that creates confidence among state residents.

RECOVERY RECOMMENDATION EXAMPLES
Following are some of the recommendations mentioned Thursday:
• Boost resources for childcare funding and availability, to include creating an advisory team to work with the Arkansas Department of Human Services to reestablish childcare services around the state.

• Use as much federal funding allocated in the virus fight toward testing and tracing.

• Workforce training should continue to be a funding priority. 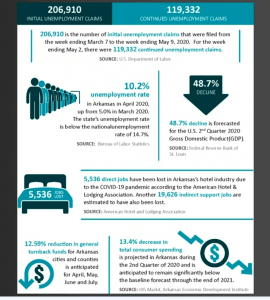 Walton also previewed a page from the report showing that economic headwinds include an estimated 12.59% decline in turnback funds to Arkansas cities and counties, an estimated 13.4% decline in consumer spending during the second quarter of 2020, and the loss of 5,536 jobs in the state’s hotel industry. He said the recommendations are just one part of the issue, and significant economic challenges are present and will continue.

“We expect the economic headwinds to persist as long as the virus is here. And I think that generally reflects this notion that these are inextricably linked crises; the economic crisis and the health crisis, and you’re not going to solve one without solving the other,” Walton said.

Referring to Thursday’s report of a continued rise in COVID-19 cases in Arkansas, Walton said the rise in cases does not indicate a tie between the recent limited reopening of some Arkansas business sectors.

“I think you can’t look at the numbers and the graphs and the trends without being a little bit concerned. But I also think it’s really important here to note that the increase in cases that we’ve seen is not statistically correlated to the steps that we’ve been working to put forward to get the economy reopened,” Walton said.

EMPLOYER LIABILITY PROTECTION
Walton said a common theme during task force discussion meetings was the need for employer liability protection as employees return to workplaces. He said not having more immunity for employers could be a “potential drag” on the ability to recover because of a “large degree of uncertainty in this area.”

“While there is not a perfect solution there, we are setting out a few recommendations here for the governor and we’re happy to stand by and work with him to find a solution here that helps provide some certainty and some clarity for the businesses and the institutions beginning to work again in Arkansas in this new environment,” Walton said.

Gov. Hutchinson said Thursday he wants to hear from legislators before moving on any of the recommendations.

“This is something I’ve always supported, reasonable tort reform, but as to which one of those alternatives is a good means to accomplish the recommendations, I need to hear more from the General Assembly,” he said.

In response to media questions about if liability protections leave employees without legal recourse, Hutchinson said “a balance” is needed between protecting employers and employees. He also said most Arkansas employers are focused on protecting workers.

“It’s also very, very important that the employers do the right thing. As Steuart mentioned, the vast majority do exactly the right thing, in fact, they go even the extra mile to provide a safe workplace,” Hutchinson asserted.

Walton pushed back against the politics of tort reform.

“It’s not about picking a partisan side, it’s about trying to find a way for the state’s economy to recover,” he said.

UPDATE: Stephanie Malone, executive director of the Arkansas Trial Lawyers Association, offered this comment in opposition to the need for tort reform.

“Arkansas has faced an unprecedented crisis, in which no Arkansan has escaped. We support Gov. Hutchinson and appreciate his steadfast leadership during this time. His actions have been calm, judicious, and thoughtful at a time when reactionary behavior and unnecessary responses could easily be the order of the day.

“Moving our economy back to full scale is critical and fortunately Arkansas is on the right track. We must do so without stripping Arkansans of their Constitutional rights. They must be protected at a time that everyone is so very vulnerable. This crisis must not be used to advance anyone’s political agenda, especially when there is no factual crisis to base such significant changes upon. Our organization is made up of small business owners in all 75 of our counties. They’re volunteers, chamber members, and community leaders. They’re also often the first stop to help Arkansans facing personal crisis. Each of us are committed to our communities and to serving the state and the governor as a resource as we all navigate these uncharted waters together.”