It was also announced Friday that tent camping would return to state parks on June 1, and the governor made public the members of his newly created COVID-19 Technical Advisory Board.

Known COVID-19 cases in Arkansas totaled 6,777 on Friday, up from 6,538 on Thursday. Of the 239 new cases, two were from a correctional facility. Of the total cases, 1,699 are active cases, 144 are in correctional facilities and 73 are in nursing homes. The number of deaths rose from 125 to 132. The number of COVID-19 patients hospitalized in Arkansas reached a new high of 113 on Friday, up from 104 on Thursday. There are 24 patients on ventilators, down from 27 on Thursday. There are 4,946 Arkansans who have recovered.

Arkansas Secretary of Health Dr. Nate Smith reported that the four counties with the most cases in the Friday tally were Washington County with 53 new cases, Benton with 38, Sevier with 31 and Crittenden with 21. Smith also said the state has conducted 121,303 tests since March 11, which is 4% of the state population. 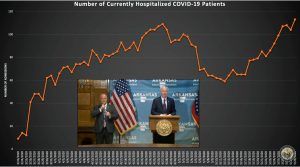 Smith was asked during the briefing about President Donald Trump’s decision on Friday to suspend the U.S. partnership with the World Health Organization pending a review of the organization’s COVID-19 response. President Trump alleges the WHO is guilty of “severely mismanaging and covering up the spread of the coronavirus.” The WHO is an agency of the United Nations focused on international public health issues.

Smith, who will be a federal employee in August when he leaves Arkansas to be deputy director for Public Health Service and Implementation Science with the U.S. Centers for Disease Control and Prevention (CDC) in Atlanta, gave a careful and concise answer. He said the WHO does a lot of good things and he is hopeful the U.S. will return to supporting the organization.

The Arkansas Department of Health (ADH) in coordination with the Centers for Disease Control (CDC) has advised about proper cleaning techniques to ensure maximum safety for park guests, as well as the staff who will be doing the cleaning, according to a statement from Parks, Heritage and Tourism.

“We have been diligently working towards this goal for weeks,” Arkansas State Parks Director Grady Spann said in a statement. “We were first able to open camping back to RVs with self-contained bathrooms on May 1. Now, with proper PPE and training, our parks staff are able to keep the bathhouses and restrooms sanitized according to ADH and CDC standards. Our main concern continues to be the safety of our visitors and staff during this public health emergency.”

Lodges, cabins, YURTs, and Rent-A-RV had been limited to Friday through Monday only rental. They will now be available for weekday reservations with some restrictions to ensure proper cleaning.

The department advised visitors that Park Rangers and staff will enforce social distancing guidelines and other health protocols.

TECHNICAL TASK FORCE
Gov. Hutchinson announced May 23 the creation of a technical advisory board to help the state better use technology in the fight against COVID-19. Dr. Austin Porter III, deputy chief science officer at the Arkansas Department of Health, was named advisory board chair.