With more people spending more time at home during this era of social distancing, the U.S. Marshals Museum is using the opportunity to reach more people and start to tell the story of the Marshals Service.

Museum curator David Kennedy was live on Facebook for about 45 minutes Friday (April 24) introducing viewers to some of the weirdest and interesting pieces in the Marshals Museum collection and answering questions. The livecast is something the museum plans to continue on Friday afternoons at 2 p.m. for at least the foreseeable future.

Kennedy talked Friday about the Marshals Service’s Justice Prisoner and Alien Transportation System (JPATS), which is headquartered in Kansas City, Mo. JPATS’ air fleet operations center is in Oklahoma City with a hub in Las Vegas. Kennedy showed a photo of the JPATS hanger in Oklahoma City and one of the unique badges of the service’s aviation enforcement officers.

While on the subject of unique badges, he showed off one of the rarest badges of the service — a gold honorary U.S. Marshal badge. There are fewer than 10 of the badges, Kennedy said, noting the one in the museum’s collection is the one given to James F. Reilly, American geologist and former NASA astronaut. Reilly flew on three space shuttle missions and is the director of the United States Geological Survey. Reilly’s badge went with him into space, Kennedy said, noting he had it with him on the International Space Station (ISS).

Other unusual items highlighted Friday included handcuffs used on Manuel Noriega when marshals escorted him from Panama; Deputy Freddie, a goldfish who lived in an aquarium at the marshals headquarters from 1979 until his death in 1998 and who is now mounted on a plaque; roll of toilet paper wrapped in illustrated brown paper mailed to a federal judge in protest of court-ordered forced busing in Louisville, Ky., in the mid-1970s; and an engraved presentation pistol given to then U.S. Marshals Service Director Stanley Morris by President Ronald Reagan. 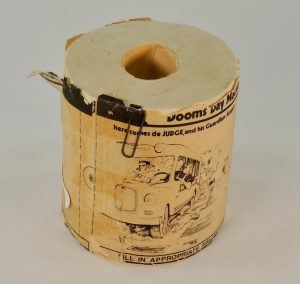 All of the pieces in the museum collection have a story, Kennedy said, and those stories need to be told.

“These are the two pieces in the museum’s collection I have no qualms about people touching. I understand the depth of emotion people have to the actual experience and how it helps to touch and understand that story of history,” Kennedy said.

Construction of the new U.S. Marshals Museum in Fort Smith was completed – except for exhibits – earlier this year, and museum staff has moved offices to the new facility. The museum still has an outstanding $13.6 million needed in its capital campaign, with $8 million of that for the museum’s guest experience design and construction, said USMM Foundation President Alice Alt. The museum recently received a $500,000 donation with the donor requesting the museum find matching funds.

“That this donation was made during (the COVID-19 pandemic) because he believes in the organization and the mission of the museum shows hope,” Alt said. “(The U.S. Marshals Museum) is seen as a hopeful, viable institution.”