A total of 534 new homes — built in either 2018 or 2019 — were sold in the area that feeds into the Bentonville School District during the first six months of 2019. That’s more than three times that of any other school district in Northwest Arkansas, according to Jeff Cooperstein, a researcher for the Center for Business and Economic Research at the University of Arkansas’ Sam M. Walton College of Business. The Fayetteville School District totaled 152, Rogers totaled 147 and Springdale had 137.

The disparity is because in addition to Bentonville proper, portions of Bella Vista, Cave Springs, Centerton, Highfill and Rogers feed into the city’s school district, which covers 142 square miles. Other districts may cover more area, but not with land that’s suitable or desirable for residential development.

Land is less expensive in Centerton and easier to build on, and that drives development in that city, said Mark Marquess, developer and owner of Riverwood Homes in Fayetteville.

“In the last year and a half, between [“affordable” home builders] Rausch Coleman, Schuber Mitchell, Riggins [Construction & Development] and us, we probably pulled over 400 permits in the Bentonville School District, primarily because of subdivisions in Highfill, Centerton and west Bentonville,” Marquess said.

Homes under $300,000 are “affordable” housing, and make up most of the demand in Northwest Arkansas, he said.

In Benton County, most people buying affordable homes are either moving in from other parts of Arkansas or from out of state and are coming to work for Walmart or vendor companies. Buyers in Washington County are likely to be from the area or university graduates who decide to buy a home a few years after graduation, Cooperstein said.

CHALLENGES TO DEVELOPMENT
The biggest obstacle to the affordable residential market in Northwest Arkansas, Marquess said, is the lack of lots for small builders to buy from a developer that allows them to build homes under $300,000 in the four major metro markets, “due to the cost of land and development costs.” 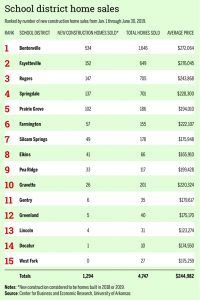 “The biggest change we’re seeing today versus five years ago or even 15 years ago, is that prior to the recession, there were a lot of subdivisions all over Northwest Arkansas where builders could buy lots at a price that could still keep them affordable,” Marquess said. “But in the past 10 years, the cost of land and infrastructure has gone up so much that it’s almost impossible to bring a lot into Northwest Arkansas under $45,000 to $50,000. And when you’re at $50,000, you’re going to have to be at basically a bare minimum of $300,000 to make it work. So the majority of affordable homes in these markets will have to be provided by the larger homebuilding companies that are able to self-develop these projects, because they require significant capital upfront along with strong bank financing.”

Area affordable home developers Riggins, Rausch Coleman Homes, Schuber Mitchell and Marquess’ Riverwood Homes self-develop most of their lots, buying raw land, getting it entitled by the city to develop the lots, installing all infrastructure and finally building all the homes in a subdivision.

“This is about the only way to provide lots to build attainable housing in the four metro markets for homes under $250,000. This allows us to control cost of lots and construction without having to pay retail,” Marquess said.

Much of the land in Rogers and Springdale school districts lies in the hilly, rocky area around Beaver Lake, which doesn’t have sewer or services, so the area is difficult to develop into a subdivision.

“Rogers has seen an incredible commercial development, but trying to find land on the west side of Rogers has been very difficult at a price point that makes it accessible to develop residential lots, not commercial or multifamily,” Marquess said. He said the same is true with the east side of Fayetteville and also Springdale, which hasn’t had a major development in the last couple of years.

FACTORS TO CONSIDER
When choosing land to develop, Marquess considers accessibility to Interstate 49. Land within 5 to 10 miles of the interstate is desirable because most of his buyers are dual-income families with spouses working in different cities, or single-income families “under the age of 35 who might be a nurse, policeman or public servant and need to keep payments down.”

While Centerton is not close to the interstate, it is convenient to the Walmart headquarters and vendor offices, all of which are within 10 miles.

“Beyond that, we have to have good utilities, sewer and water available. School district location is not as important,” Marquess said. “In Northwest Arkansas, we’ve been blessed with our school systems, both public and private.”

FUTURE OF NEW HOME CONSTRUCTION
Marquess believes affordability will continue to be an obstacle for developers in the coming decades.

“This is a great area to build. Everything shows for steady growth over the next five to 20 years, especially with all the professional services and jobs that are coming in,” Marquess said. “The biggest challenge we’re going to have is trying to keep homes affordable. Trying to develop a subdivision and build homes under $250,000 is a real challenge. That’s why you don’t see many subdivisions until you go out to Elkins or Prairie Grove or maybe west Centerton that are going to have lots for sale because of the price of land, infrastructure and impact fees. It’s going to be a challenge over the next 10 to 20 years to keep a good product out here in what classifies as an affordable price.”

Although there’s been concern that the Springdale market had slowed, Marquess believes new home sales will increase there this year because of new subdivisions opening in Elm Springs. Fayetteville also will be strong, he said, and will “double or triple” the permits for new construction.

“We have 180 lots going in on the west side [of Fayetteville] right now. Almost 60 will start in the next 30 days, and another 120 should open up by late summer or early fall,” he said.

Marquess believes new home sales in the Rogers School District will not move up much this year, maybe only 20%.

“Centerton/Bentonville will be very successful this year because we’ll be bringing online almost 120 lots in 60 days, and a couple other developers are doing the same thing,” he said.