As communities around the country prepare for the decennial Census, conversations about population changes and shifts will become more frequent.

There is a lot at stake when establishing a decade-long baseline for a community. Highway funding, grant eligibility, and a number of financial outcomes hinge on a place’s census figure. But state legislators will be closely watching the Census to determine political outcomes because the census will set the table for legislative redistricting.

NORTHEAST ARKANSAS SENATE DISTRICTS
Of the state’s six northeastern-most Senate districts, four will lose population and two will gain (see map below). However, losses will outpace gains resulting in a deficit of more than 23,000 residents. The district currently served by Senator John Cooper will need to lose more than 9,000 residents to hit the estimated target. The west Craighead county district was the 6th fastest growing Senate district in Arkansas.

However, the district seat held by Sen. Dave Wallace of Leachville needs all of those residents and 2,500 more to restore that district to full size. Wallace’s seat was among the most rapidly shrinking Senate districts in the entire state. His district sits atop a “stack” of shrinking seats that extend all the way to the southern border of the state.

There are some mathematically convenient options. If you combine the surplus residents of Sen. Cooper and Sen. Blake Johnson of Corning, you come away with a number almost exactly equal to the number of new residents Sen. Wallace’s district needs. So you have three contiguous districts, with the appropriate amount of residents. In short, the same folks represented by Johnson, Cooper, and Wallace today could be represented by them in 2022, assuming they are all still serving.

NORTHEAST ARKANSAS HOUSE DISTRICTS
Of the state’s 14 northeastern-most House districts, eight will lose population and six will gain (see map below). However, losses will outpace gains resulting in a deficit of more than 11,000 residents.

The four House seats in Jonesboro and Paragould have added more than 10,000 residents since 2010. But those residents will need to be spread throughout 10 other seats and 14 counties.

The seat currently held by Rep. Dan Sullivan in Jonesboro was the fastest growing in the region. It will need to shed an estimated 4,240 residents during the next legislative redistricting. But those 4,000 residents aren’t enough to replace the 7,600 residents needed to restore population to the eastern House seats held by Rep. Johnny Rye and Rep. Monte Hodges.

While it doesn’t currently border those two seats, Rep. Brandt Smith’s Jonesboro seat will be a likely source of new residents. Rep. Smith’s district was the second fastest growing in the region and will need to shed approximately 3,200 voters. The seat held by Smith will contract, likely sharing residents to the south, northwest, and west.

THE POLITICAL CONSEQUENCES
One dynamic to pay attention to is where the “political” center of gravity will lay in these newly-aligned districts. Could a district that was historically centered around Poinsett county now be more influenced by developments on the edge of Jonesboro? How many northeast Arkansas legislators will ultimately reside in Craighead county? What incumbents will receive the residents they need to stay in “their” district?

While the population patterns have been obvious and emerged slowly, the political reality is still unknown and will occur all at once.

Editor’s note: Jamie Gates, executive vice president of the Conway Development Corp., is a Talk Business & Politics contributor with his column, “Data Points.” The opinions expressed are those of the author. 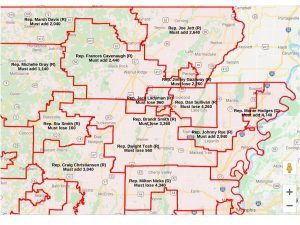 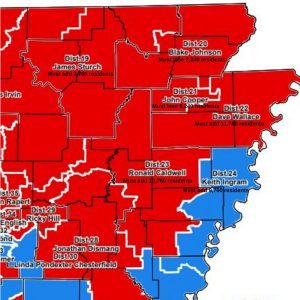