Roby Brock: We hear a lot about workforce and its role in economic development, but electricity and energy play a pretty big role too. Can you explain how this works?

Danny Games: For context from a historical perspective, you actually have to go back to the late 1800s and the railroads for the first utility that was engaged in economic development. You’d build out the railroads as you were building cities and towns and ports and improving the ability for commerce and connecting the east to the west and the Mississippi River to the Midwest. Fast forward to the early 1900’s and the electrification infrastructure was being built out in American cities and it was essentially built on the same model that you had to have good, reliable, distributed electricity in order to serve customers who were making things. It was all about being able to take some of the raw materials that were coming off the farms and turn them into finished products, be it food or textiles or other bulk commodities that were finding their ways onto the shelves.

Principally, the model is the same today. We provide a very vital raw material in contributing to the production and manufacturing of products that obviously are a lot more sophisticated and a lot more refined and largely exported from our state.

Brock: What does your office do, particularly with site selection preparation? Why is that important for economic and industrial development for communities? 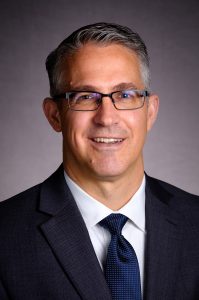 Games: We have always had an office of economic development. I realize economic development can be defined and characterized in different ways, but the areas that we focus on are existing business in industry and we have dedicated people and resources towards that. We have the community development piece that works very closely to build and foster the assets of our communities to make them more attractive locations for capital investment and jobs. And we have new business development, which is typically what you see resulting on the front page of the paper.

Some of those things manifest itself into the site selection center. We have an online statewide database for available sites and buildings throughout the state. We strongly encourage our communities to list the buildings and the sites. Essentially, if it’s not listed on that site, it really doesn’t exist because that’s where the prospective companies or site location consultants go to to begin their search for prospective options across the state.

We also encourage the certification of sites. We have a 50-point due diligence process that we run communities through and the evaluation of sites and being able to validate that these sites really are available. That includes everything from the control of the site either through ownership or having a legal option, to geo-technical work to phase ones, any cultural or wetland assessments, and then basic information on utilities and how the site is served.

I think a third component around economic development training, we focus heavily on trying to build the capacity of the individuals in our communities and at the state who are engaged in this day-to-day.

Brock: In the Delta and rural parts of the state, what do you see happening with population shifts?

Games: Certainly the demographic challenge is a big challenge. The communities in southeast Arkansas and Northeast Arkansas are obviously being challenged by the realization of the urbanization of America. This is not unique to Arkansas. It’s characteristic of the entire country.

Brock: Where does alternative energy fit into the mix of the future for powering communities?

Games: There’s a lot of news being made about the growth of solar thanks to a recent bill passed at the legislature and then there’s a lot of regulatory and rule making proceedings at the Arkansas Public Service Commission right now. We’re at a crossroads for us as we contemplate making solar energy available to communities, cities, towns, and hopefully companies on a larger scale. You’re seeing a lot of what I would call sub-scale smaller projects that are on the market right now, and a lot of what we are focusing on, as you’re aware, is very large utility-scale solar projects.

When you consider that we are and will continue to be the largest solar provider across the state and we’re building projects that are 30% to 40% less in cost than some of these sub-scale projects, it becomes an economically attractive resource not just for us as an electric utility and for our customers, but for prospective companies that are looking at Arkansas. So No. 1 is price.

No. 2 is reliability. If we can satisfy — and I’m confident that we can — a low price and reliable electric source that is also green and renewable, we think our customers are really going to be in a very advantageous place in the state and in the marketplace. This has advantages for economic development, and we think probably the vast majority of those solar arrays are going to be built in the Delta region of our state.